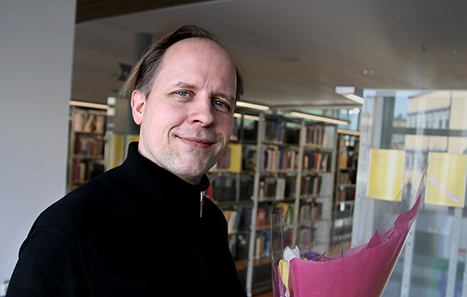 Olov Viirman, doctor in math focusing on mathematical didactics at the University of Gävle and Karlstad, has examined in his research how the math teachers at the university teach.

The math education on university level faces major challenges.  Mathematics is becoming a part of more and more of the university students’ educations. Meanwhile the lack of prerequisite knowledge amongst the students increases.

This is partially due to the problems that the math education has suffered which is indicated by the Swedish students deteriorating results in international investigations such as PISA and TIMSS.

-Therefore there is a need for increased knowledge about the mathematical education within higher education. A project aimed at reforming and improving the education should be founded based on a solid knowledge of the current situation, says Olov Viirman.

How do mathematical teachers teach

Olov, through his research, wants to contribute such knowledge by examining how math teachers in higher education teach about a specific mathematical concept, the function concept.

The analysis is based on video recordings of seminars with seven teachers from three Swedish universities and university colleges.  The theoretical starting point is math as linguistic practice.

-The teachers teaching documents turn out to belong to two intertwined linguistic practices – A math didactic course and a math educational discourse – and I present the classifications of these with a special focus on procedures.

All the education analyzed has the same outer form. That which in previous research has been known as “chalk talk” e.g. that the teacher writes on the black board and explains what he writes.

Olov, however, shows how education that has the same outer form can be considerably different.

- An important result in my research ergo is that if one wants to characterize educational practice then it is not enough to describe the educations outer form.

- One has to take a closer look at the details in what it is the teachers do and how they do it, says Olov Viirman.

Olov Viirman, post-graduate in mathematics at the University of Gävle.
Phone: 073-915 89 26
Email: olov.viirman@hig.se