Health at any cost 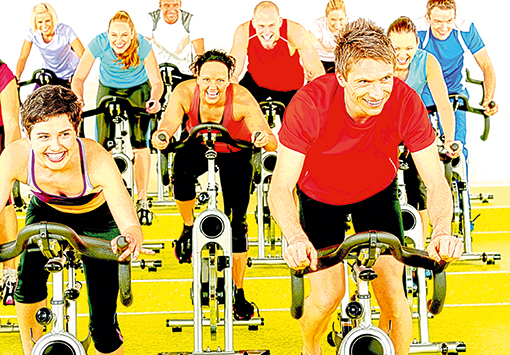 - This Fitness culture contrasts a society consisting of values such as solidarity and fellowship, where people are accepted based on their conditions, says Göran Svedsäter associate professor in sports science at the University of Gävle.

A fitness culture with a lot of focus on health and training takes a firm hold on today’s society. Daily, both in media and especially in tabloids we are feed notions such as fitness and wellness.

The newspapers drown us in this rhetoric’s every day; eat like this, live like this and you will be able to evade this and that. Everyday this endless nagging goes on and on.

- One article outdoes the next one; Worse and worse the exposure grows so big that the individual risks losing the grasp on what it is actually about, says Göran Svedsäter associate professor in sports science and responsible for the subject sports science at the University of Gävle.

- If one as an individual should follow all these advice one would become almost schizophrenic. It creates a kind of neurotic state and in the long run risks breaking the self-confidence of people.

Although there existed a fitness culture in the 40’s and 50’s as well the difference compared to now is that, except in some cases, it was more private and healthy. The culture back then was less systematized and it also made less of a difference as a social factor.

Nowadays everything is much more commercialized and behind the phenomena is a whole
industry of products. There is everything between diet products, supplements and cosmetic surgery. There is also an entirely new effect created by all these symbols, cloths, attires and work-out studios.

- It is all about a trend-based industry that reflects the anxiety that many in today’s society are affected by. Focus is on the superficial; Is one thin enough, good enough, pretty enough? Says, Göran Svedsäter.

- There is a social CV that one has to upper hold on Facebook and other social media, by uploading information about how much one is working out.

If one doesn’t have one’s training record, social CV, or well-trained body in order, then there’s a moral shortcoming behind it.

- In that case, then one is not taking care of oneself, one is lacking self-control and is mistreating one’s body.  This has become a social symbol of status, says Göran Svedsäter.

Doping becomes more and more of an issue in health studios. In this “aesthetic group” girls also have their focus on the bodybuilding culture.

- We have little control of the aesthetics and this is actually where the real problem lies, says Göran Svedsäter

One can no longer treat doping as an internal problem to the sports scene; it has to also be seen as a social problem and be understood through sociological causes.

- And then we are discussing unhealthiness, fitness and the achievement culture, which has another dimension than sports.

Nobody knows how large the phenomenon is, since adequate facts and studies are still missing. Traditionally, research concerning addictive problems is mainly aimed towards alcohol and narcotics.

- Despite lacking evidence based research, we can see that this is about to happen. The problems have yet to become big enough for the alarm to be sounded, but in a couple of years the sick leaves and the broken mental states will start to show themselves, says Göran Svedsäter.

He asks himself why the health institutions are not investigating this to a larger extent.

All the more commonly doctors and therapists are now also warning about it. They are announcing that it is not healthy to be so concerned about one’s health. More people are now starting to discuss whether this does not give a reverse effect and creates a neurotic condition opposed to what is actually healthy.

This represents a symptom of, or a result of what is generally happening in our society; the lack of self-esteem, or the belief that one is not good enough.

The openness concerning the individual is also much bigger now and soon everybody will know everything about each other because of social Medias such as Facebook.

-In a couple of years this performance hysteria, where competition is hailed to be the optimal, will emerge as a big social problem.

Just look at the reality shows at television where one is creating media celebrities. There, brutal and cynical exclusion mechanisms are employed and are then reflected as success stories in media.

- One could be as bold as to say that this fitness culture stands in contrast to our whole welfare thought process. To a society consisting of values such as solidarity, companionship and including-mechanisms where people are unconditionally accepted. This is important for the individual himself, but also collectively for society.

-This is now starting to crack when we get these cultures about health/unhealthiness as an individualistic factor. Health at any cost!