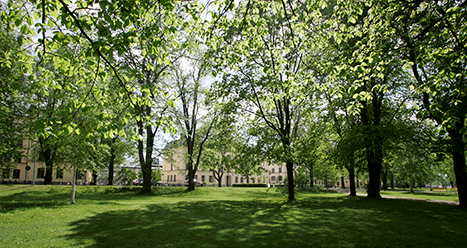 The University of Gävle, where a teaching aid for Swedish learners is
under development, was during a couple of days visited by a group of
Swedish teachers from Estonia, Latvia, Lithuania and Finland.

The visit concerned a three year long project called “A step towards Sweden”. The project is about further developing the Swedish education for Baltic youth.

Swedish and life in Swedish society

- The initiative comes from Latvia and during two years together we will be designing an internet based teaching aid for Swedish education that will also contain knowledge about life in Swedish society, says Sarah Ljungqvist associate professor in Swedish at the University of Gävle.

The project is a part of Nordplus, an international collaboration between Scandinavia and the Baltic countries that amounts to universities and university colleges in five different countries.

- The nature of this collaboration is unique, because it is an international project in Swedish that isaimed at Sweden. Usually, today’s internationalization is executed in English, says Sarah Ljungqvist

- We are focusing on the regional universities and not the larger ones that are otherwise the usual focus when it comes to international collaboration. This is very important, says Aija Jakovele, Swedish teacher at the university in Daugavpils, Latvia.

- There is a large interest when it comes to learning Swedish amongst the youth in the Baltic countries. We share close economic and cultural relations. Swedish companies are active in the region and we share old bonds, says Aija Jakoovele

This is the second meeting; the first one took place in Daugavpils, Latvia this autumn. Later, there will be a meeting in Finland, Lithuania, Estonia and a final meeting in Lithuania year 2016 where one of the high schools will be visited to measure the success of the project.