The University of Gävle and the Japanese amoeba robots 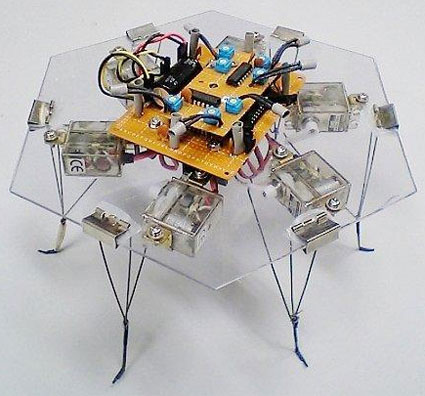 The Japanese invest big money to, in collaboration with the University of Gävle; create robots that do not need to be controlled but rather the mobility lies in a sympathetic nervous system.

The amoeba and the Japanese railroad wonder

It all started when Toshiyuki Nakagaki, a world famous professor at the university in Nagasaki, were studying how one could utilize the unicellular amoeba Physarum to show the best way to build railroads.

He took one of the amoebas and put Cornflakes at all the locations. The sizes of the cornflakes were in proportion to the locations, and so the transparent amoeba had to create a network to transport the nutrients within the cell. 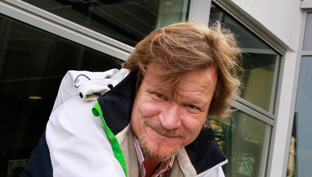 Meanwhile lecturer Anders Johansson was conducting his research at the University of Gävle, where one of the fundamental ideas was to understand how ants are able to optimize and find the shortest path, despite not being able to see.

- The purpose was to describe exactly how it works, and then to be able to generalize the results to many other organisms, says Anders Johansson, mathematics lecturer at the University of Gävle.

Collaboration with Japan was initiated

To form a mathematic model Nakagaki requested help from applied mathematicians. Anders got to know about the project, which he found to be the most promising of all the ideas that existed in the context.

- They were working with models for ants and bees, but then Nakagaki thought of the Physarum-model and so they tried building the ant-model based on it.

The collaboration has now been ongoing for three years. The group consists of 10 researchers from France, Japan and Anders. Within the group there are biologists, robot researchers and applied mathematicians.

-Toshiyuki Nakagaki has even written a children’s book about the Physarum amoeba. He was a biophysicist and noticed in his studies that these systems were very effective.

-It could be added that Nakagaki together with two of the other researchers has received the Ig Nobel Prize for his research. The prize is given for research that can be considered astonishing, but that can still be the cause of reflection and new perspectives.

The group found that they needed to upgrade the model for random walking, how the migrations are controlled and that they were not the result of a local coincidence.

If one uses robots, they will move flatly but also horizontally and how can one learn this kind of geometry?

The result was a simple model based on local positive feedback: If a transport route is being used it is reinforced and expanded.

-My contribution is fundamental research but the Japanese engage themselves in robot development, amoeba-robots. They invest big money to develop robots that move according to these principles.

The mobility should not have to be controlled but rather lie in a sympathetic, self-learning nervous system. Another benefit is that these amoeba-robots are able to move in spaces that no normal robots can.

In the future the processor power will be invested where it is needed. These amoeba-robots avoids obstacles and do not spend their processor power on moving. For example robots whose moving mechanics are similar to amoebas and worms have been constructed.

It undulates its way forward

The robots are about half a meter long and moves forward through pressure-operation, they undulate when they move. They move very well, they have joints, and they have very little tension in them, and that’s the point. When they encounter an obstacle they will never damage it but rather they adapt and find a way around.

- The processor power is spent on what they are supposed to do and in a more high-tier system, one can imagine that they will be able to perform some sort of transport or build something, says Anders Johansson.