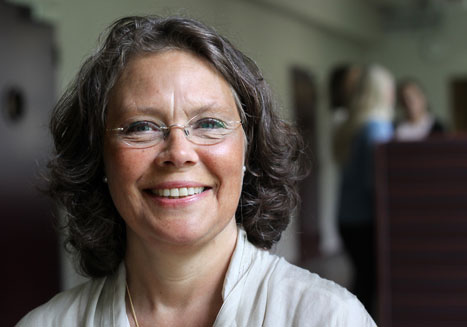 Katharina Andersson, post-graduate and lecturer of the Swedish language at the University of Gävle, shows in her research that the writing competence that is measured in the national tests in third grade does not show the entire truth.

To increase the knowledge and contribute to understanding of boys writing competence Katharina Andersson has described, analyzed and interpreted 231 ten years old boys’ texts from the third-grade national test in Swedish in Sweden.

At the turn of the century when we started using PISA-investigations and national tests the results were presented separately divided by sex. And because boys performed worse a mass-media pressure about boys having a difficult time at school occurred. They believed that this was a new phenomenon that had never occurred before. But it turned out that there were previous grade statistics from the middle of the 60’s to be found at The Swedish National Agency for Education, and that girls had always have had better grades than boys.

- We can go back in time almost as long as the schools have existed and see that girls have always performed better, says Katharina Andersson

- But the fact that we divide it into two categories is what I believe to be the big problem. There are so many other factors that it can be affected by. What parents have been elected, what does the parents living situation look like, how do they feel, what economic situation does the parent have.

- If one choses one or several of these factors the result will change. And if we did that, we would not be separating males and females, because it’s not like a family only consists of boys.

What is it that is being measured

When the teacher evaluates the texts he is supposed to evaluate whether there are three complete sentences with capital letter and punctuation. That there are 10 correctly spelled grammatical words and content words and check if the story has a beginning middle section and ending.

- The national test has an outdated view on what knowledge is. And I show in my dissertation that there are other writing competences that can be measured and that could then result in a different way of looking at the performance that boys make, says Katharina Andersson.

- For example there is a test about fear. “Can you write about how it feels to be afraid?” and when the teacher is to assess the text it only happens based on the grammatical criteria. But whether it’s about fear or whether it is a story or not, for such things there are no criteria, in fact is nowhere to be found!

What they know is never tested

Boys are made to write a story by hand on a lined paper, even though they usually only use computers. Teachers have up until the last test only chosen a few children that have had large difficulties that could write on a computer.

- This spring I visited a class where all students were allowed to write on a computer. I happily noticed that all the students opened there computers and wrote without unimpededly and there were no differences between boys and girls.

How boys show their writing competences

The analysis of the test’s texts based on other foundations than the grammatical demanded new tools for analysis, that In turn have made it possible for new aspects of boys writing competences to become visible.

Recipient consciousness
Katharina has been looking at for example recipient consciousness, to understand who one is writing to. She finds influences in the boys texts from for example Astrid Lindgren, whom in Emil I Lönneberga writes, “Now you know what Emil did when he held the large party in Katthult”, and the boys write in the same manner as well: “Now I will tell you how I got stuck in the ski lift..”.

- And so then the boy is aware that someone will be reading this, and probably it will be the teacher and so the awareness of this can be seen. These are things I have been looking at, it is not a grading criterion in third-grade, but it is certainly a real competence.

Intertextuality
Furthermore she has been looking at intertextuality, role models, that one refers to another text. The boys refer to a text but tell their own story.

The boys do what boys do consequently, disregard their sister. It’s not Hans and Greta, it’s just Hans.

- Some researchers mean that this is a sign of lack of imagination. But I believe it’s the other way around. Per Lagerkvist received the Nobel Prize for Barrabas, he had been reading a book (the bible) and then he wrote his own story based it.

- This is a great way to displaying that the boys know many stories.

What stories is it that they know

- When I’ve been looking at it I can see that the boys have read many stories. They read children’s books and they read computer games, watch television and a lot of movies. And they have read other books that are surprising that small children have read.

- And so you can see that they have these texts in their heads and despite them sitting in a classroom getting ready to write and that there is a lot of tension and that they are being tested, they still remember these texts. But this is not valued, because it is not written in the curriculum.

The test itself affects the teachers

The test itself affects how the teachers teach. If the test contained more competences to be investigated the teachers would teach about them.  Currently the Swedish subject is shrinking and consist only of language correctness and grammaticism.

- But writing is not just that, it is so much more and that’s why I’m trying to point it out. When we speak of knowledge the only thing being said is “they can’t spell”

The dissertation widens the understanding

The result of the dissertation will hopefully affect the national tests construction in the future and widen the view of boys writing competences.

The results show also show that the writing education of the future needs to focus on content and language development and that writing by hand may be switched out for keyboards and touchscreens, even when writing tests.

Katharina Andersson defended her thesis the 11th September at the pedagogical faculty of Åbo Akademi in Vasa. Her dissertation is called “Pojkar can visst skriva! – skrivcompetenser på nationellt prov I svenska I årskurs tre I Sverige” (Boys can certainly write! – Writing competences on national tests in Swedish in the third grade in Sweden”)

The opponent is professor emeritus Jon Smidt, from the university Høgskolen i Sør-Trøndelag, Norway and Kustos is professor at Ria Heilä.Ylikallio, Åbo Faculty, Finland, which also is the main supervisor. The supervisor is post-graduate Åsa Morberg, the University of Gävle, Sweden.