Can the local newspaper survive 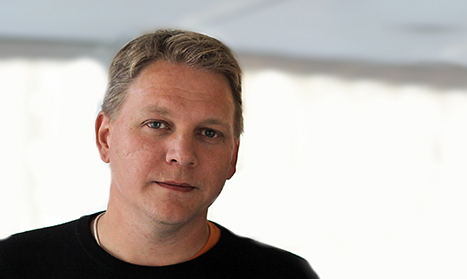 - I want to hear them say that they are independent investigators of the government and I believe the business idea to be journalism, says Mats Hyvönen, media researcher at the University of Gävle.

One of the most well-known products, to those above forty at least, is a newspaper.  Even a dog is able to learn finding it. But suddenly we view it in a new light historically – what is this?

This was how Mats started. He himself reads the newspaper every day without fail and if the newspaper wouldn’t come one day, it would ruin his breakfast.  But then he asked himself why the breakfast would be ruined. Is it because he has to get a grip on the world?

- No, it’s the ritual; I read the paper in the same way now as I did 15 years ago. I have my favorites and those which I avoid due to blood pressure. So I started considering, what is a newspaper?

How the legitimize themselves

Mats have studied how the local press has marketed and described itself and how they have legitimized their activities.

How they have described themselves with the self-appointed mission that exists within journalism and how it is used as a profile for the local newspaper companies,  investigate people in power positions and convey the world and reality,

Only that which they have written about themselves

He has only been looking at that which has been published in the newspaper for the readers - Everything from lead articles with its “mission statements” to small ads. All the texts where they in some way write about themselves have been included in the investigation.

- I have about 10-12 full A4-binders. After all it’s 90 years and four newspapers, Gefle Dagblad, Arbetarblader, Ljusnan and Söderhams Kurien.

Over time and respective newspaper

He has compared over time and respective newspaper, how does Gefle Dagblad write about themselves nowadays compared to in the 90’s or before the war? And also comparisons between Hälsingland and Gävle and between liberal and labor movement papers.

- What’s interesting is the movement over time because the papers are like expected fairly similar to each other. What is it that has been understood from looking at different periods? What has been emphasized?

- I arrive at a periodization, four periods.

The first period: -1935 Mobilization
Then the newspaper still had a political assignment, it was about mobilizing, mostly labor-papers. During this period they used a quite authoritarian language towards the views where the newspaper enlightens and educates its audience.

The second period 1935-60: The Teletype
This is when the teletype makes its appearance, meanwhile the newspaper become less political. Neutral mediation reappears as the ideal and the absolute through decrease. Even the small local newspaper reports the big world. -They are like New York Times. This was a time of pride. Even Norrlandsposten is a part of the world.-eye.

- To investigate government should have been a part of it all the time, but it wasn’t. The manner of conveying utilizing tele prints completely took over.

The third period: 1960-1990 Investigation
The journalism was made more professional and the ideas that we are familiar with today were formalized. This is where the modern ideal about the independent journalism that investigates those in power appears. The newspapers sheds light on that which is hidden from the reader, they investigate and dig things up and present them to the public.

The forth period: the 1990’s- construction
The local newspaper have now become more and more local again and they are a prerequisite and condition for local solidarity. At this point they write that they do not report on the entire world, but are there for the readers. They are on the reader’s side.

- As a citizen one starts to wonder, when they speak of local community and siding with the reader. It is not exactly what I want to hear, but rather that they are independent investigators of government. -And here one can sense a divide, since during all these periods journalism has been the core business. And I believe the business idea to be journalistic.

- It’s a turbulent time that we currently live in when we talk about newspapers dying. But then the question becomes: What is it that is threatened, is it something timeless? Probably not, most likely it’s things that have always been changing.

Newspapers without journalism would not be historically unique; newspapers have existed much longer than journalism has. In the really far back historical perspective it wouldn’t be unique either, to put aside the investigating manner a bit, that was how it was done in the 1800’s.

- But we do not really want a modern society without journalism. One can imagine that journalism will always remain, but maybe it will take new forms.

There are many speculating what will come. These newspapers started as political projects and have had many different owners during different periods. But today they are all included in the same group, Mittmedia.

A very offensive group that relatively early decided to “prioritize the digital” and maybe they are even considering that they don’t need these old trademarks in the future.

-A fairly bewildering thought, Gefle Dagblad which was founded 1895 maybe is something that isn’t needed in the future, maybe it’s another product.

-Is it fully digital, does the paper carry any meaning? What will they do when we get more and more platforms and channels that can be utilized, where is the local newspaper positioned in this? These are things that the employees at Mittmedia contemplate daily.

It has to work out

Mats is not very pessimistic, he is assured that these type actors will always be needed locally. The Ereader that is the big change that has happened since 2010, he believes might be the savior of these newspapers because it means that people might migrate from the printed paper to the digital one.

- And then what has always been the large revenue for local newspaper which is ads can be gained.

- But then exactly how it will look and how they will define this assignment that they have assumed can be subject to change. It could be entirely different, maybe there will be a lot more readers involved, for example.