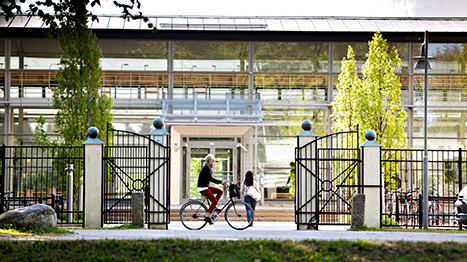 The degree course has a position in the Top Twenty list of the “most applied for courses” amongst 3300 that can be found in Sweden’s universities and higher education institutions. It is a list lead by Stockholm School of Economics, followed closely by medicine and law courses at other universities.

Tell us more Tommy Gerdemark, Head of Department of Business and Economic Studies at Gävle University……

How is it possible that you can compete with medicine and law degree courses at other universities?
The Business Administration degree course, a web-based distance learning course at Gävle University is well established and has been recognized for a number of years. There is also a great demand for being able to study to become a Business Administrator using web-based learning, at the same time as there are few higher education institutions that can offer that possibility.

What does this mean for the Department of Business and Economic Studies?
Large numbers of applications are inspiring for all of us who work in the department. A large number of applications lead to clever and ambitious students to work with, which creates in itself the basis for a course of high quality.

Does the course in Gävle differ from others?
The content of the country’s business economics courses is relatively similar. At the moment we are working on our business course so that we can give the content a special profile and thereby reinforce the trademark even more. We also dare to say that some of the country’s best degree projects in business economics are now being written at Gävle University.

Nine out of ten get jobs

A report that investigated what happened to students that finished their courses here in 2010 found that nine out of ten are in a job one year after their studies. Gävle University is on level with Stockholm School of Economics.

What makes the business students of Gävle so much in demand?
Even if we believe that we could do even more within this area one explanation could be that there are practical industry-related elements in almost all the courses. This contributes to the students being able to quickly convert their theoretical knowledge when they start in the workforce.