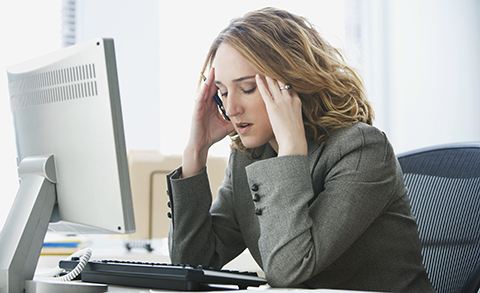 An evaluation of the facts done by a group of researchers from amongst other places, Gävle University, has made, has shown that there is strong scientific evidence that work can both cause and promote mental ill health.

The government research funding body Forte received a directive in 2013 from the government to study what significance work had for mental health. Today the researchers report was presented in an article giving rise to debate in DN. (Dagens Nyheter, a Swedish national newspaper)

Diagnoses of mental illness up by 48 percent

The current number of cases of psychiatric diagnoses, like insomnia and anxiety, increased by 48 percent between 2012 and 2014 and now constitutes 40 percent of the total number of cases of illness. The most common diagnosis is acute stress disorder.

Costs for sick leave in 2012 were, at a conservative estimate, 6½ billion SEK and neither human suffering, declines in production, extra costs for employers, diminishing tax revenues nor the individuals’ costs are included.

Why do some people go on sick leave?

An important issue to look at is what it is that makes many people with psychological problems able to go to work, and further research into the “fitness factors” for people with illnesses is an important area.

There is a clear scientific connexion between work, mental ill-health and sick leave.

Women are more often on sick leave due to psychiatric diagnoses than men, but if men and women are exposed to the same stress their reactions, in the form of mental ill health, are the same.

The positive effects of work weigh up

The positive effects of work generally weigh up and are greater than the detrimental effects of long-time unemployment or sick leave.

It is possible to do some jobs even if one is ill, whilst others can be difficult to manage if one has mental problems.

To return to work after a lengthy sick leave due to mental ill health is a process that must involve many people: the person on sick leave, the employer, the job centre, insurance agencies and healthcare authorities.

Today researchers do not know which move is the most effective when someone returns to work after being on sick leave due to mental illness.

However, one knows that the workplace must be involved, so that the co-worker can return to work in an effective way regardless of the cause of illness.

There are many fitness factors at work that have shown that the risk for mental ill health can be diminished and that ought to be used as preventive measures.

There are strong humanistic, business economical and social reasons for trying to reverse the trend of increased sick leave because of mental ill health.

People in management positions have a big responsibility to transform the present working conditions.

It is undoubtedly much more effective to implement these strategies before people have gone on sick leave.

Tell us more
Per Lindberg, University Lecturer in the Department of Occupational and Public Health, Gävle University:

What will the consequences be if this is allowed to continue?
“I will start by saying that it will not get worse and worse until everybody is on sick leave for mental ill health. It will come to a halt.

But sick leave (or just ill health) results in significant costs and suffering both for those directly involved, and their relatives, and the taxpayer who ends up footing the bill.

We shall consider very carefully every possible action that can prevent mental ill health and/or promote mental health.”

Why is this coming just now?
“It was not part of our assignment to investigate the incidences and change in either mental ill health or sick leave due to psychiatric diagnoses, solely to clarify what we know today about the connection between work and mental ill health.

I don’t think anyone really knows, and I do not want to speculate. We must however remember that the increase arose from historically low numbers in statistics, and that the number of people written off sick varies over time and depends on many factors, amongst other things the regulations.”

What is the most urgent measure to take?
“Nothing can be done really quickly. I believe that one must think long-term if one is to achieve permanent changes.

One thing that could definitely cause effect right now is to reduce the negative stresses in working life. They are however not the only cause of reactions to stress; ill health, private lives, societal norms and disposition are other reasons.

One must ask oneself if all sick leave due to mental ill health is beneficial, if it really helps the individual. It can often be counterproductive when the sick person takes on a role and normal reaction is treated as a medical problem.

Our overview shows that many manage to work despite fragile mental health. There should be more research. Who are they? How do they handle their situation? What can we learn from them?”

What will research in the near future focus on?
It depends on the grants and the areas to which research is allocated. The overview gives a whole list of examples in areas where we need more knowledge not least from the perspective of health promotion and sustainability.”

Who has been involved?

”There are many people involved both from our own institution and from other higher education institutions which is very nice.”