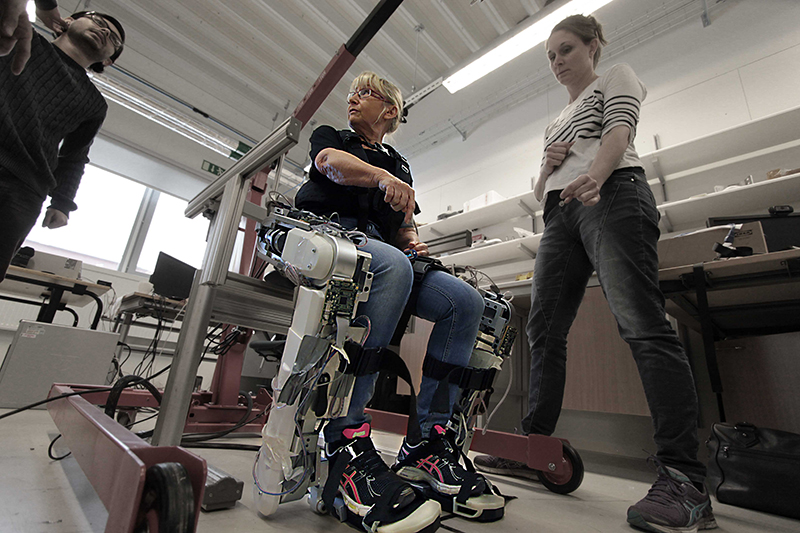 “A harness for an aging population of the future is now being developed at the University of Gävle. A robot harness (Exo-Legs) that will promote balance and the strength to manage daily life,” says Gurvinder Virk, Professor of Robotics.

You do not need to stop being active

Professor Gurvinder Virk’s team at the University of Gävle are at the final developmental phase of building a robot harness, Exo-Legs. The harness will help the elderly to stand and walk, keeping their balance and thereby being able to continue living in the environment they are accustomed to.

“Exo-Legs will give self-confidence and support and be a help in performing normal daily tasks. They will convey thirty percents strength which is what many elderly have lost,” says Gurvinder Virk.

Exo-Legs are a so-called exoskeleton for the lower body that will facilitate greater freedom of movement for the elderly. Via sensors at the hips and thighs that sense when the muscles start working, the exoskeleton operates like artificial muscles that support the leg and bend the knee.

The aim has been to design three different models, from a simple one with fundamental support for daily activity, to more advanced models.

“We are testing this on thirty users in Gävle, people who have been involved in the whole process. Sweden is at the forefront of this development, our competitors have not yet arrived at their final tests.”

The elderly population of the world is expanding and the pressures and costs of health care are increasing. In twenty years time it is calculated that ten percent of the population will be eighty years old or more.

People want to live in environments that they are accustomed to, and there will be a need for support when they run out of energy and illness affects their mobility. People all over the world are now focusing on how one can develop mobility aids.

“What we have today is walking frames or wheelchairs. They are cheap aids but the costs increase when one has to convert the building where there are staircases and other obstacles – it becomes very expensive.”

When researchers have asked the elderly what the most important requirement is in their daily life, then the answer has been to be able to stand, to walk and to raise oneself up from a sitting position.

The subjects have emphasised that they want the harness to be practical, easy to use, with a good fit, easy to put on and take off and light.

“It is very important that the harness can also help elderly people to regain self-confidence after a fall, for example.

The worst thing about a hip fracture is that one loses one’s self-confidence and as a result life for these elderly people becomes more sedentary and it can be the beginning of a 'downward spiral',” says Gurvinder Virk.

A hindrance has been safety, because industrial robots have been designed to keep robots and people apart. Now, as far as robots that are physically attached to people are concerned, then strict safety regulations are required.

“Now we are obliged to follow new safety standards that in turn help us to develop new robots that fulfil those demands for safety.”

Safety in the world of machines is so clearly defined, that if the unit develops a fault then it must not be able to cause an injury. The person must be able to resist, if the person is stronger than the robot then they are safe.

“We provide a robot that conveys thirty percent more strength and that is being on the safe side. The safety demands in the consumer version are not as great, so we can make it lighter and cheaper.”

The plan is to have the first, lightest and most flexible consumer product on the market at the end of the year.

Subsequently one will increase the complexity to contain all three units where even the ankle is included.

“As long as the product is affordable then it will be in demand. The aim is to go into mass production within three years. In comparison, the medical skeletons on the market at present cost between $100,000 and $200,000.”

Unique for the project:

 Designed as a consumer product for the elderly

 The mechanics; that sensors respond to human movement

 Adapts to the user, easy to modify for greater or lesser effect

Gurvinder Virk Singh is a Professor and researcher in robotics. He has worked within robot research since 1995 and been involved in many international projects; projects where a new type of moving robot has been developed, robots that have climbed walls, been used in nuclear power stations and in volcano research.

Most of these projects have focused on how one gets a robot to move, that is mobile robots. So that when the issue arose at the University of Gävle, about helping people to become more mobile then it was a natural sequel.

Gurvinder Virk uses the expert knowledge that he has accumulated in over twenty-five years of robot research.

Now the present project; to create greater mobility for people, with the help of mobile robots attached to their bodies.