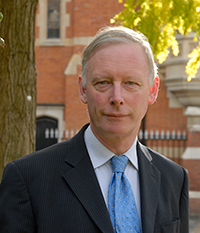 Professor Stephen Stansfeld, is a renowned international researcher of noise pollution. Do not miss his lecture at the University of Gävle on the 21st of April.

Professor Stephen Stansfeld, at Queen Mary & Westfield College in London, has been granted an honorary doctorate within the field of Built Environment at the University of Gävle.

He has made a decisive contribution to the fact that the research at the University of Gävle within the field of environmental psychology is recognised and respected internationally.

Noise pollution is a common cause of psychological ill health; tell us more Stephen Stansfeld:

The modern individual is constantly subject to noise pollution, what are the consequences of this?

“The most common effect is insomnia. But the exposure to traffic noise has also been shown to be connected to hypertension and a greater risk of heart disease and strokes. Regarding children, it has been shown that there is a connexion between exposure to chronic aircraft noise and difficulties in learning to read.”

“In 1980, when I studied psychology, my professor at the time was interested in the effects of aircraft noise on our mental health. I became involved in a study that focused on the link between sensitivity to noise and depression. It has continued to interest me since then.”

What can be done to improve the situation?

“There are a number of things that can be done, one is of course to try and reduce the noise at its source, to make vehicles and aircraft quieter and improve tyres and road surfaces. This has also taken place, but at the same time vehicles and aircraft have increased in number, so the problem has not been solved.

Another method is to reduce the speed of traffic and set up barriers which reduce noise near roads and increase the sound insulation in our buildings. One has almost reached the limit as far as developing quieter aircraft is concerned. We will solve the problem in the end but it will take twenty to thirty years.”

What will it be like in the future do you think?

“We will see more research showing the negative effects of noise pollution on our health. Noise pollution is one of many factors, but very many are exposed to it. I will be talking about the effects of noise pollution on children. And also about other social and mental aspects that influence our mental health. There is one aspect in particular that I shall be talking about and that is the inequality regarding health. People who live under unfavourable conditions also have poor health - both physical and mental.

Lecture – Noise, a common cause of mental ill health

Honorary doctor at the University

Professor Stephen Stansfeld is to be appointed honorary doctor within the field of Built Environment at the University of Gävle.

He is commemorated for his significant work in the development of research in the field of noise pollution and environmental psychology at the University of Gävle has such high quality and is internationally renowned and respected.