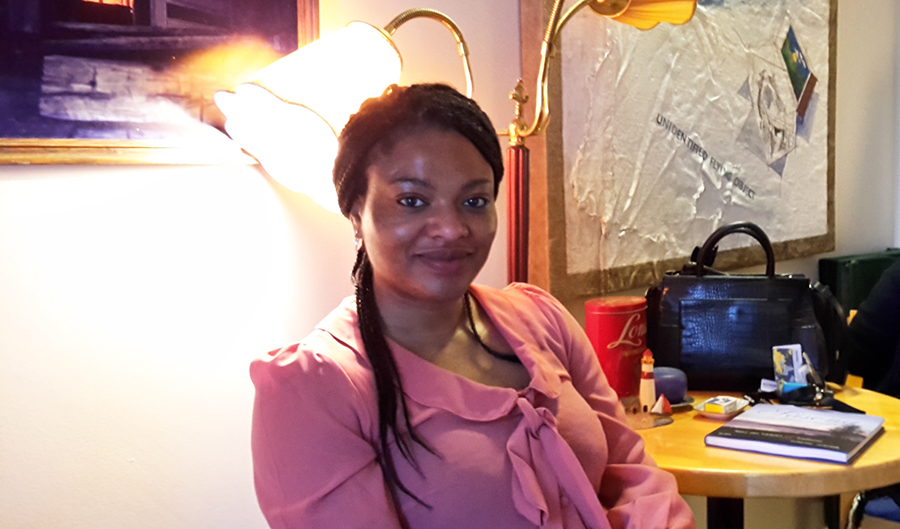 Theresa Ogionwo is reading the last year of the International Social Work programme and has now started a non-profit aid organisation, "Selfless” that will help victims of Boko Haram and also those who have become orphans due to the AIDS epidemic.

Theresa, who comes from Nigeria, has previously done a degree in economics and IT in Great Britain, but says that she has always known that she wanted to work with the least well-off members of society, especially the street children in Lagos.

She wanted to start a non-profit aid organisation, and in order to do this she realised that she needed particular skills.

England was the first choice

”So I decided to go back to university again and my first choice was England; but as my father-in-law lived and worked as a lecturer in Lund, Sweden became an alternative.”

Theresa searched the web and saw that the University of Gävle had a Bachelor of Science programme in Social Work with a specialization in International Social Work, the only programme in Sweden, in English, and that is why she chose Gävle.

She has worked in both England and in Lagos and says that it wasn’t easy for her to go back to studying - it became possible due to the fact that she has people around her who support her decision. She, and the children who came with her, have now been in Gävle for almost four years.

”Lagos is a city of almost 20 million inhabitants. I have lived in Lagos most of my life and seen the problems with the street children.”

The organisation will work with victims of Boko Haram and help children who have become orphans due to the AIDS epidemic.

Working with victims of Boko Haram is very personal for her as her brother-in-law was killed in an attack in 2002 when Boko Haram bombed one of the UN aid organisations.

”The more one reads about and sees the horrific things that Boko Haram are responsible for, the more one wants to help.”

Animal life that is disappearing

She says that there are so many things that she would like to do, but one has to start somewhere and hope to be able to make a difference.

Her husband is from south Nigeria which is the richest part of the country, but also the area that suffers most from environmental pollution and where the worst social problems can be found.

“Animal life that is unique for the Niger Delta is disappearing; there is so much to do.”

Education is the answer

She thinks education is the answer and relates that she has learnt a great deal about how she sees things nowadays.

“I am not the same woman I was when I came here three years ago. This was the fundamental structure I was looking for and have now found.”

However she sees scope for improvement; a improved course structure, and above all more lecturers and personnel that have a good command of English.

The programme includes a whole term of internship which Theresa did at Rapatac. In the founder of Rapatac, Moussa, she found a visionary leader with dreams and goals for young people who risk becoming marginalised.

Sanaya Singh, who is Theresa’s supervisor, is full of admiration for Theresa who took many of her own initiatives, and for Moussa who gave her that flexibility to act on them.

They took, amongst other things, the initiative to create “Sweden meets Africa”, the big cultural festival that Theresa managed. A festival in Gävle with designer fashion, spicy food and new accounts of life in Africa. Fashion designers came from Nigeria, professional models came from Stockholm and a number of artists performed on stage.  See the article in GD

“I think it is difficult to make friends in Gävle,” says Theresa. “From an early age in Sweden you sit alone in your room. In my country one is always part of group when one eats and when one socialises. But even countries like Nigeria are gradually becoming more and more individualistic, especially in the cities, and families are becoming smaller and smaller.”

“We learn so much from students like Theresa and their anecdotes, that highlight matters of which we were unaware. We ought to take advantage of the opportunity to learn from these students,” says Sanaya Singh. “Now it is organisations outside the University, like Rapatac, who took the chance to take advantage of this resource. We need to come out of our comfort zone somewhat, here in Sweden,” she says.

“At Rapatac there were three volunteers, two Germans and a Hungarian,” says Theresa. One of them told her that he feels more like an African now.

"Strange that I should have to come to Sweden to feel more like an African.”