Amina and Goran are going to improve school 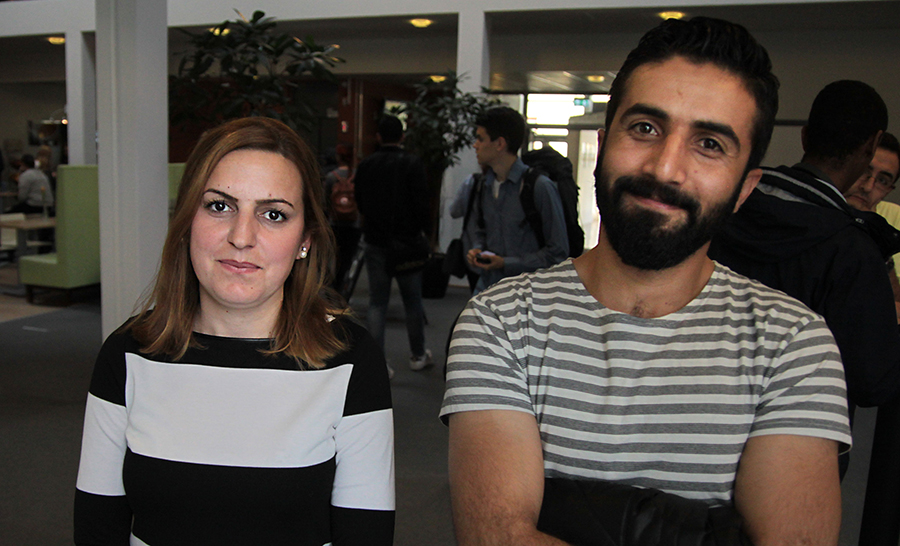 Language support assistants are now being trained at the University of Gävle who will give students with mother tongues other than Swedish a better chance of success in their studies.

Amina Mohammad and Goran Shemdin both come from Syria and have been in Sweden for almost two years. They are now in their fifth week of the university’s course for language support assistants.

Goran thinks that it feels good that they are studying several subjects e.g. philosophy.

Amina says that one benefits such a lot if one, in the capacity of assistant, can help the children to understand the Swedish school system, where one plans and studies together.

”My aim is to come back to Gävle and train to be a teacher,” says Amina.

According to Goran there are not many differences between schools in Sweden and in Syria. The greatest difference according to him is how the teacher treats the pupils.

”In Syria it is more authoritarian and here in Sweden one is more friendly”, says Goran.

Both worked as teachers

Amina is thirty-two years old and in Syria she studied and worked as a part-time teacher in primary and secondary school. Goran Shemdin is twenty-seven and studied French at the university in Damascus while also working as a French teacher in secondary school.

Goran says that he really likes it here and that he dreamt about becoming a teacher when he went to secondary school at home in Syria. When he came to Sweden and begun to learn Swedish, he saw this course, which he sees as a way to becoming a student councillor in the future.

”There are, unfortunately, very few teachers in Sweden that only teach French, one must in that case become a teacher of several languages, so that is why at present I am thinking of becoming a student councillor in the future.”

Amina describes that when she came to Sweden she missed her family and life in Syria so much that she thought she must find a way to become assimilated in her new country.

”So I started at SFI (Swedish for Immigrants) and talked to my careers advisor about doing some practice in schools. I was able to spend six months at a pre-school unit and then I saw this course.”

“I feel we are safe in Sweden, both my family and my children. In Damascus one was never safe after the war came.”

“Every evening I feel gratitude that we can sleep without feeling scared. Life begins anew and the whole time I encourage my children to study and try hard,” says Amina.

Collaboration between the University of Gävle the Employment service and municipalities in the region has now resulted in a course to train language support assistants. Municipalities in the region have a great need for language support assistants and will make training positions available at their schools. The European Social Fund has allocated funds for the project and the course starts in the autumn.

The course, that is not part of the university’s normal choice, is sixteen weeks long and theory is alternated with practice. In total eighty people are to be trained, in three groups, for possible future employment in Gävleborg and Älvkarleby.

“The heads in the region think it is difficult to recruit language support assistants and there can be people who have been teachers in their homeland, who have had a pedagogical education, but who can’t get a job and are excluded from the job market,” says Katarina Löf, head of department.

There are great benefits to be gained for the University in meeting participants with a different cultural background. The demand for teachers with this experience is very great at present.

In the long run the hope is that the course might lead to the participants considering becoming teachers here in Sweden. The leap towards applying for a teacher training course might then not be so big.

“Other benefits are that pupils with different mother tongues have a better chance of establishing themselves in the Swedish school system, then going on to further education and have a positive future. There are many advantages to the educational project,” says Glafira Sörensson, project leader.