The Edda in a new light 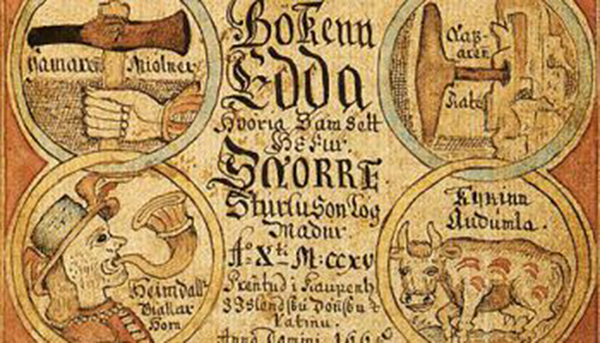 ”The digital Edda will now be the basis of all future research on Snorre Sturluson’s Edda because it will be available in a completely new manner,” says Lasse Mårtensson, researcher and lecturer at the University of Gävle.

Researchers are now going to digitize the original manuscript of the Edda. It will be a literal edition, character for character, in principle.

The manuscript, called Codex Regius in Latin, is acknowledged to be that which best reflects the original works and is seen as one of the most important sources of pre-Christian Norse mythology. The Edda is extremely unusual precisely because it describes the pagan religion.

A textbook for skalds

The Edda was, when written, initially created as a textbook for skalds and it is a manual of poetic language and metre.

”The mythology is written down mainly to illustrate for the reader the metaphors and figures of speech used in Norse poetry. It is probable that Snorri intended it to be a textbook on the art of poetry.”

Our oldest hand-written manuscripts in Swedish consist of provincial legislation. There was no interest in the pagan religions here, compared with Iceland.

”We have runic stones, but they are usually Christian and there are very few with explicitly pagan expressions.”

A gold mine for research

One will be able to search for different forms of speech and characters. Find all the examples and see exactly how it is expressed in the manuscript, find new interpretations in the document and see if earlier publications have been shown to include errors.

Characteristics typical for a specific scriptorium (place where one produced manuscripts, often a monastery), for example will be evident as well as where and in which context the particular manuscript has been produced.

“One has dealt with this previously but without the help of the digital tools that we now posess. This will be a gold mine for research.”

Historians and theologists and even philologists and linguists have a great interest in Snorri’s Edda, because it describes the attitudes towards pagan religion, so the potential users are numerous.

“A historian, a scholar of religious studies interested in a god, e.g. Oden or Thor, will be able to search for and identify all examples of them in the text,” says Lasse Mårtensson.

“In the past, as soon as one wanted to examine a manuscript, one had to go to a library or suchlike where the specific manuscript was kept and sit oneself down in a reading-room, often putting on a pair of white gloves.”

One has made corrections

This manuscript is calculated to be from the early 14th century, and Snorri Sturluson died in 1241. That is almost a hundred years after the work originated so quite a lot has been changed.

“This is the case with medieval manuscripts, that they are hardly ever preserved in the original, rather they are copies.”

“The translations and ordinary copies are often a little distorted; one has added and changed things for the purposes of legibility.

The name Edda is used in only one manuscript and that is in the “Uppsala Edda”.

It says at the beginning of the manuscript, “This book is called the Edda and has been compiled by Snorri Sturluson.”

“If we had not had this manuscript we would not have known that it was Snorri Sturluson who was behind it, this is not stated anywhere else.

Apart from Snorri’s Edda there is the Poetic Edda. The Poetic Edda is a collection of poems, the first part is made up of mythological poems about the pagan gods Oden and Thor and legends about them, often called poems of the gods.

Then there is a section with a collection of poems that are often called Heroic Lays. Mainly poems about Sigurd Fafnesbane, legends surrounding him and his successors. The same narrative can also be found in Germany but there he is called Siegfried. Wagner also composed an opera of the story.

The three-year long project that is being run by the University of Iceland will be the focus for many researchers. Lasse became engaged because he had previously worked with the manuscript, with Snorri’s Edda, the so-called Uppsala Edda. It will be made available in a similar manner.