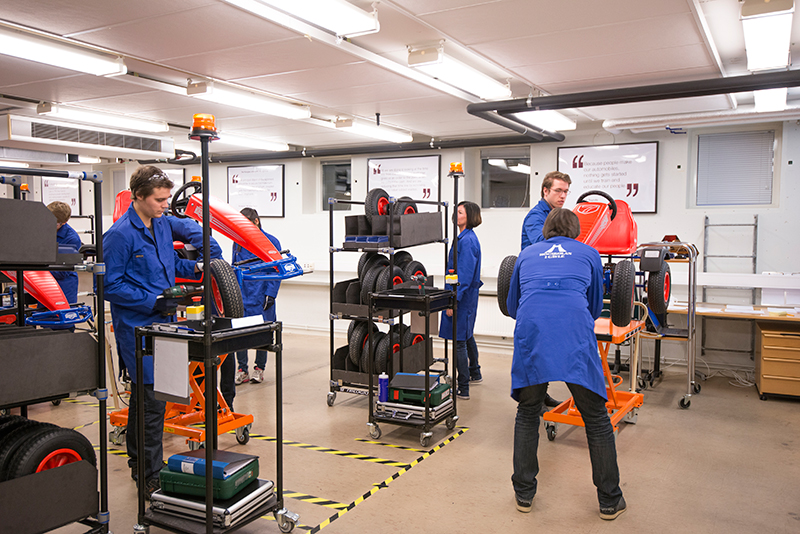 At the University of Gävle, there is a unique research-led and experience-based course in Human Lean.

Mikael Bergman, production manager at Fagersta Stainless, tells us that he first got into contact with Human Lean and the University of Gävle during the spring of 2015.

At Fagersta Stainless, the decision had been made to invest in changes especially in the division Mikael Bergman was responsible for, the wire drawing plant. It was a problem child that for a number of years had had grave profitability problems, high sick-leave numbers, bad quality and low efficiency.

“I had introduced Human Lean in a smaller division earlier and thought at the time that this is really suitable for a bigger industry, where the impact can be very high,” Mikael Bergman says.

The whole division, 10-12 people each time, participated in an all-day-event with theory and then practice at “The Pedal Car Factory.” As a direct result of what was learned there, a reorganisation was introduced where, for instance, positions and functions were changed: team leaders were added, now with the responsibility of production leaders.

“We continued to have frequent contacts with the University, who also visited us and worked a lot with leadership, behaviour and respect for the individual.”

Human Lean stands for two things, respect for people and continuous improvement to that which is better.

“Respect for people means, to my mind, that we respect that people are different. We are good at different things, but everybody needs to be given the chance to contribute with what they can.”

At Fagersta, one has made the choice to adapt the running of the shifts so that the employees are off duty when they have their children; one focuses on fitting all the pieces together and the night shifts are gone.

“We make a lot of adaptions; we have adapted the whole division after the staff we have, and the effect is amazing.”

The results came at rocket speed

“The results came surprisingly soon and there was an incredible change in behaviour down at the factory, a rocket-speed journey,” Mikael laughs. 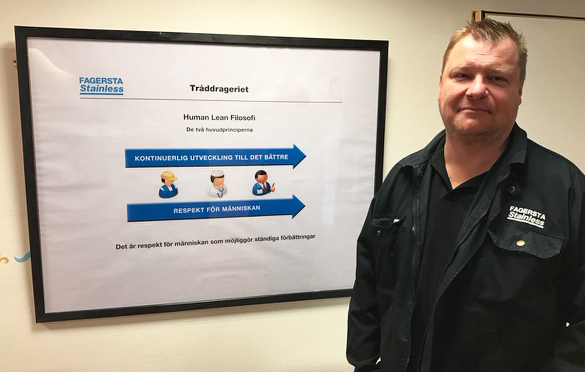 Now, there is no mobbing

When Mikael started at the wire drawing plant—the plant is rather large and spread out—many people had their coffee breaks two by two in their booths or machine.

“But then we started to tear down all the small booths and built a big one instead and a common dining hall. Now, that dining hall is too small, because everyone goes there at coffee breaks.”

They have potlucks on Fridays and the atmosphere is good. Much of the tough jargon from the industry is gone and there is no mobbing.

“We run our meetings around the board three times/24 hours, when we, among other things, check up on how people are feeling. This is also a part of Human Lean, that I picked up during the course in Gävle.”

“I have worked for this company for many, many years and have been a manager for two and half years for this big division, where there has been a crisis for a long time. The staff has done an amazing job. I am incredibly impressed and all this comes from the inspiration I got in Gävle,” Mikael Bergman says. 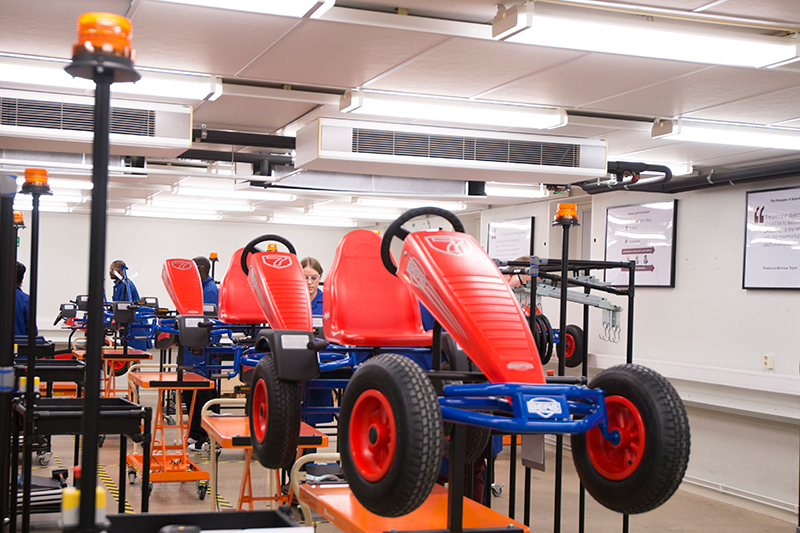 HLC carries out experience-based courses for both students and companies/organisations. In their courses, theory, based on results from research on Lean, is interspersed with practice in the environment “The Pedal Car Factory” at the University of Gävle.

HLC also contains a think-tank with representatives for the University of Gävle and different organisations which promotes exchange of experience and knowledge. It is an important part for the development of the Human Lean education.

“Our research has resulted in collaboration with Scania, where good results have been achieved. We are the best in Sweden, if not in Europe,” says Gunnar Herdin, Human Lean Center.

“There are many institutions who educate in Lean, but what makes our programme unique is that the combination of theory with practice, and the fact the individual and health are seen as fundamental factors of production.

“Lean, and especially Human Lean, has a lot to do with leadership. A leadership that should be supportive, sympathising and which strives to develop members of staff.”

“For instance, it can concern posing questions in such a manner so as to spark the creativity of those who are working at the production line. In our course, we emphasise this kind of leadership and give our participants the opportunity to experience its importance,” Gunnar Herdin says.