The church needs airing out 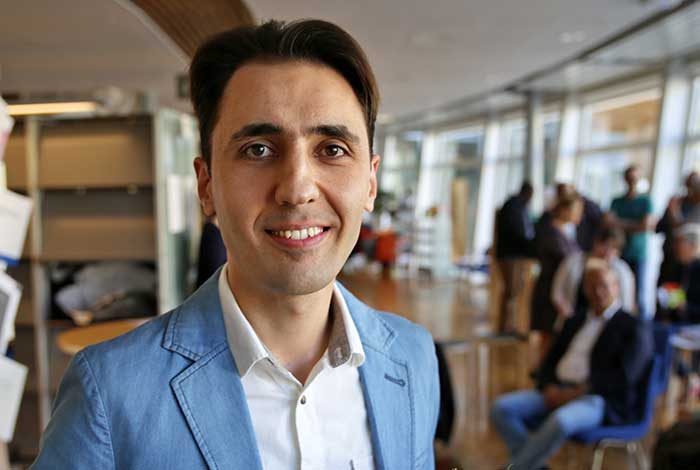 “Intentional airing is old knowledge which has been forgotten. If you open a church door during one hour, 50 percent of the air is aired out, and we can scientifically prove that it works,” says Abolfazl Hayati, researcher at the University of Gävle.

In a church with many people and lighted candles, particles and carbon dioxide are formed which we need to be rid of. Air infiltration is not enough; instead we must resort to airing.

“Here, the only possibility is air infiltration combined with intentional airing.”

Natural ventilation concerns wind and buoyancy. To make it work, we need wind or indoor-outdoor temperature differences, driving the air into the building.

“So, the wind is important; there must be a wind or a difference in temperature.”

Airing can in turn be performed in two different ways. If there is only one opening on one side, it is called single-sided airing. If there are two or more openings on different walls, cross flow can be used, making the airing much more intensive and efficient.

“If there are many people inside, and you want to air out all the particles or adjust the carbon dioxide level, you need brief, intensive airing which makes cross flow the best option.”

“Then there is a risk that condensation will form on the cold surfaces in the church and valuable paintings and furniture may be damaged. In the winter, the air is drier, reducing the risk for damages by high humidity levels.”

“So, in the winter, cross flows and airing could be used more frequently, whereas one should be more careful in the summer.”

To adjust temperatures in a school during recess, or in stadiums, atriums or industrial halls, one needs to leave doors and windows open for a slightly longer time.

“Heat is stored in the air but also in walls, floors and ceilings, and for this reason it takes a little longer time to balance the temperature. But if your only concern is the air quality, a shorter time period is enough.”

Only one percent energy loss

Abolfazl Hayati points out that many believe that airing is expensive because they imagine that energy costs will increase a great deal. However, his studies have shown that the energy loss is only one percent if you air a church for one hour each week during a year.

“This isn’t much if you consider that you gain a lot. Fresher air, particles from burning candles are aired out and art treasures are protected.”

Through field measurements using tracer gas and IR-thermography together with computer simulation and wind tunnels experiments, the researchers have developed practical diagrams which are easy to use.

“These diagrams make it easy for you to calculate when you need to air the building. They will also tell you how much energy you need and how much the air quality is improved.”

The results are not only applicable to church buildings, but also to any older buildings built for natural air infiltration.

Actually, this is the first study in the world focused on developing schedules for airing large buildings that calculate the importance of wind and buoyancy.

“I have visited the congregation of Hamrånge church to present the results. All were very pleased to get a tool that showed them how they could ventilate.”

Knowledge which has been forgotten

This is knowledge people used to have but which has been forgotten. Now, researchers bring it back and show scientifically how it works.

Abolfazl Hayati will keep on doing research as an assistant senior lecturer at the University of Gävle.

“More research is needed on developing schedules for the use of buoyancy, but also wind, in

Abolfazl Hayati defended his dissertation Natural Ventilation and Air Infiltration in Large Single‑Zone Buildings: Measurements and Modelling with Reference to Historical Churches on September 29, 2017 at the University of Gävle.