University of Gävle - a success story

For more than 20 years, Hans-Gunnar Johansson has worked at the University whose activities comprise both research and education. As he now looks back on his experiences in the book Högskolan i Gävle 40 år - åren 2002-2016 (The University of Gävle 40 Years--the Years 2002-2016), he wants us to remember that even if one, like him, has been privileged in gaining an overview by working closely to the senior management, one doesn’t see everything.

“It is impressive to see how much work that has been carried out at the University of Gävle by its lecturers, its researchers and, not least, by its students. Thousands of students have put a lot of effort in their studies here and have graduated.”

The University of Gävle is today becoming one of Sweden’s largest university colleges. Our higher education institution conducts vital research and educates its own doctoral students.

“It is remarkable that our programmes and courses have become in such high demand. It is outstanding and a success story.”

Hans-Gunnar says that there is no doubt that the University has an important role to play in the region in offering higher education of good quality to people who might not have chosen to attend otherwise.

His book is full of memories and milestones from the history of the University of Gävle. Hans-Gunnar speaks engagingly and warmly of the three vice-chancellors he worked closely with.

He has never met someone with such high work capacity as Birgitta Stymne. Always active and busy, she would often remark that “Being the vice-chancellor for a higher learning institution is the most enjoyable job there is.”

Maj-Britt Johansson also possesses great work capacity and a great commitment to her work. Maj-Britt grew up and lived in the region, and during her job interview she urged her audience to “Take good care of the University, because it feels as if it is my University.”

“And, in a way, it became her University, which she could do a great many things for.”

“It has been very interesting to work with these three vice-chancellors and with the board. A lot of work, but it has been interesting and enriching work.”

In the crystal bowl

Hans-Gunnar predicts a very bright future for the University of Gävle. His advice is to keep going on the chosen road, which involves profiling its activities with a focus on a sustainable living environment for humanity.

“I would also like to see that in the future in Sweden one calls all university colleges for universities, and that there will be small and specialised ones as well as large and broad ones.” 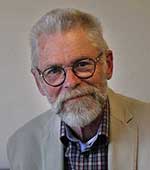 Date: Thursday 26 October between 11 and 12 am.
Place: Krusenstjernasalen, University of Gävle