The best time is now for the humanities—book release 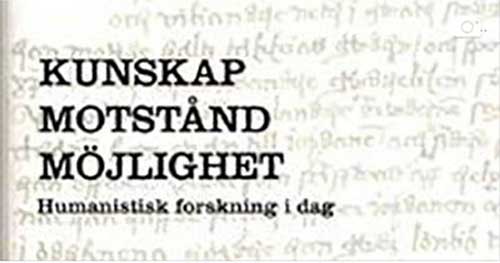 “The humanities contribute with knowledge which could nourish and be important for a sustainable democratic development. We are very proud of this book,” says Ulrika Serrander, senior lecturer in Swedish at the University of i Gävle.

Ulrika Serrander and Peder Thalén took the initiative to encourage researchers within the humanities to contribute with a text to this anthology. Their texts have been collected in an anthology with the Swedish title Kunskap, motstånd och möjlighet. Humanistisk forskning idag, which could be translated into “Knowledge, resistance and possibility. Research in the Humanities today.” The words in the title are repeated in the form of headings for the three parts of the book, which each contains six or seven texts.

“An important common matter for all texts has been to demonstrate the importance of the knowledge with which the humanities can contribute. Research in the humanities is always human-centred,” Ulrika Serrander explains.

Ulrika states that the humanities engage in searching for knowledge about the human and the human condition; in short, the traditional ideal for education.

“To offer resistance is natural within the humanities,” Ulrika claims. “Researchers offer resistance against existing orders both within society and within educational systems. We do so by highlighting injustices and describing how different groups are disadvantaged within the system because of their gender, class, ethnicity etcetera.”

Finally, Ulrika points to the possibilities the humanities give us; we may see things in new ways and develop as a community and as individuals. It may concern new teaching methods, a new form of education for special groups, describing aspects in new manners or how to engage with a certain type of literature in teaching.

The humanities at University of Gävle