Can Sweden learn from the US to prevent school shootings?

“No, Sweden cannot learn from the US,” says Sofia Wikman, senior lecturer in criminology at the University of Gävle, who recently came home from the US, where she visited Marjory Stoneman Douglas High School in Parkland.

On 24 March, #marchforour lives took place. It is a student-led protest against the epidemic of mass school shootings and gun violence which have become everyday events for American school children. The initiative comes from a group of students, for instance Emma González, and Cameron Kasky, all survivors from the school shooting in Parkland.

But the students in Parkland are far from alone. Sister protest demonstrations took place in over 830 places around the world and former US President Obama has shown his support for the students.

“Marjory Stoneman Douglas ought to be the safest school in the whole world after the tragedy that occurred there, but the atmosphere in the school is really chaotic.”

She tells us about reporters in huge OB-buses, students arrested for knife possession and others who go through psychological screening because of suspicious snap chats, incessant visitations and control and a that a big surveillance tower has been built. 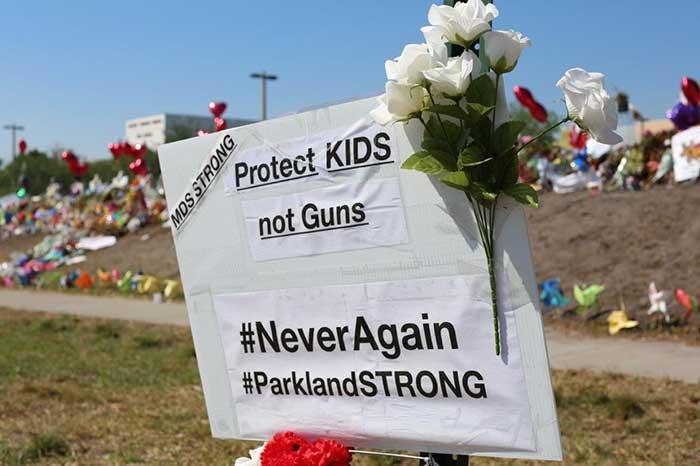 In the US, one talks about the school-to-prison pipeline, which means that some young adults are sorted out, labelled as useless, pushed out from the system and end up institutionalised.

“Since ill health among our young has increased, it is important that we see diversity as an asset, a source of creativity and innovation. School children that are like cloned robot armies do not build a safe society but are rather like a ticking bomb.”

She says that airplanes do not crash because parts of the airplane break down, they crash because relationships break down. The same logic applies to violence in schools and other work places.

“Preventing violence is about very simple things, like safeguarding relationship and make sure that it is not only you who are feeling good, but also everyone around you. That is the key to happiness.”

We are the happiest in the world

In the US, Sofia Wikman also participated in a summit for the world’s happiest countries, where Sweden and the other Nordic countries are at the top.

“As tragic as it was to visit the high school, as rewarding was it to visit the World Happiness Summit, where Sweden and Scandinavia are seen as good examples in the world.

We should be prouder

“It is important to not to try to fix things that aren’t broken. Here in Sweden we do a lot of things in the right way, so it would actually be a catastrophe if we started to follow the example of the US. However, this doesn’t mean that everything is perfect here,” she points out. “But we should be prouder of the society that we actually have, where schools and healthcare are free and where we cannot buy a semi-automatic rifle in the store around the corner.”

A model to prevent violence

On the basis of her research, Sofia Wikman has developed a model to prevent violence which states that, on the one hand, knowledge has to come from experts and be legally certain, but, on the other hand, it has to come from those who work in the institution and from the students themselves.

“Those movements that we have seen this year, both in the form of #Metoo and #marchforourlives, are symptoms of the fact that there are no channels for those who were hit hard, and the most important thing is that those who are in the core activities are given arenas to express themselves.”