New Zealand and Gävle are at the forefront concerning technology that improves people’s health in cities, and researchers from both countries recently met in an open seminar at the University of Gävle. 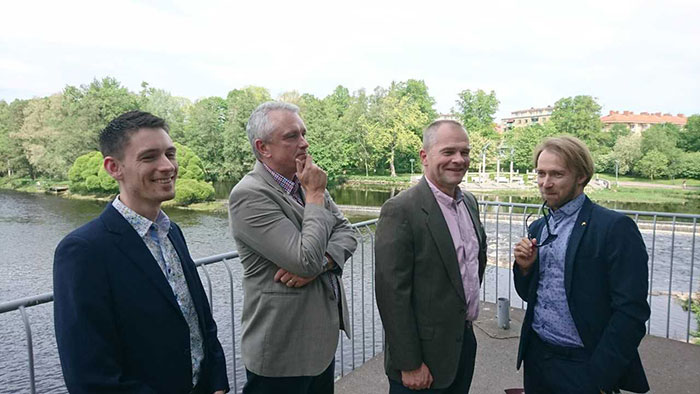 The patient with a lung disease and the app

Patients with lung diseases can be equipped with smart phones with an app to which it reports medication and health status. As the app is geographically positioned, the location, movements and health of patients in the city can be monitored.

If sensors that measure air quality are spread over the city, any correlation between when patients increase their medication and when the air quality deteriorates can be established.

“Is such a correlation can be established, certain conclusions can be drawn and used in decision making when changes are to be made in the city, for instance regarding the flow of traffic in certain streets,” says Per Andersson, process manager at Future Position X (FPX).

The idea is to create a smart city where decisions are made on the basis of gathered data from a large network of sensors; in short, new technology can then be applied to improve people’s health in cities.

“It may concern air quality, noise levels and people’s activities. We can improve the planning of our health care, increase quality and ensure better help to people. “

The city of Christchurch, New Zealand, has endured two major earthquakes during the last ten years and had to face the fact that their city had to be rebuilt. Then, the idea to build a smart city evolved. Adaptions were to be made to the city so that the people living there would live as well as possible.

Christchurch has become a research centre on smart cities and on the journey to get there a research collaboration between FXP and the University of Gävle was established.

The University of Gävle is very prominent in the research fields Geographic Information Systems and public health.

Now, something unique is being created, a bridge between health and Geographic Information Systems, realised in a new discipline, a new research field and a new master programme in GeoHealth.

“Students will graduate with entirely new skills which don’t exist on the job market today. I believe that there will be many jobs even on a global arena like in the UN or the Swedish International Development Cooperation Agency etcetera,” Per Andersson says.

Gävle in the future

We live in a digital world where everyone is geopositioned, and the opportunities to gather relevant information from citizens at no cost at all are almost limitless.

“If the hedge near the pedestrian crossing is too high for you to see a child running out from behind it, it will be enough if three people notice it. Already the next day someone will be there to cut down the hedge.”

“Gävle can be at the forefront and activate their citizens in such ways,” Per Andersson says.

The Univeristy of Canterbury, New Zealand, visited the University of Gävle 22-24 May to complete the joint research project Sensing City that the University of Gävle, the Region, Future Position X (FPX) and the researchers from New Zealand have carried out together during the last year. On 24 May, there was a mini-seminar with a chance to meet the team behind the study.