A study carried out at the Swedish Transport Administration (Trafikverket) indicates that performance is different in different spaces of activity-based offices. There is an increase in productivity if there is a quiet room or zone at hand,” Helena Jahnke states. She has been project leader for a research study on office environments at the University of Gävle.

An increasing number of offices do not provide individual places for staff. Such a type of offices is activity-based, which means that you choose workplace depending on whether your work task demands concentration and seclusion or if it needs teamwork. In general, these offices have many spaces that stimulate collaboration and generate opportunities for both spontaneous and planned conversations.

Helena Jahnke underlines the importance of taking your starting point in co-workers’ work tasks and needs when designing such an office. There are clear differences between large spaces designed for tasks that demand concentration and strict rules on one hand, and those adapted to free communication and collaboration on the other.

“It is often problematic to attempt to mix these spaces without separating them,” Helena Jahnke says.

The quiet zone the best option

Researchers observed that performance increased significantly when co-workers performed tasks that needed concentration if there was a quiet room at hand or quiet zone to sit in, compared to working in a zone where everyone could speak freely.

“We must separate these zones and create conditions that work for the different work tasks.”

Yet another aspect which is important to productivity is how we use spaces in the activity-based office.

An important finding was that four alternations between different kinds of spaces per day makes you appreciate the spaces more and productivity increases, compared to staying on one space all day. This became clear in a closer study of the results carried out together with Finnish guest researcher Anna Haapakangas.

“At the same time, we saw that it is negative factor to have to look for a workspace, and the more minutes you had to look, the more negative the impact on productivity. In three out of four offices, this was the case. To provide a sufficient number of workspaces, like quiet zones, creative rooms and social spaces, may be crucial for giving co-workers the opportunity to alternate without losing time.”

A new way of working

Helena stresses that it isn’t enough to change the office space and then expect that how we work will change automatically. Trafikverket, for instance, has changed its focus and now starts by attempting to change how they work before changing work environments; at present, such a change becomes a second step.

“A change in how we work may involve how we plan our work and use smart technology to facilitate work tasks and make it more paperless. You might need to find new strategies and new solutions, and such a change doesn’t happen in a day.”

There are possibilities for seclusion that satisfy co-workers’ needs

There are opportunities for communication

There are opportunities to alternate between different types of work spaces

There is no need to spend time looking for a workplace

It matters where you used to work

People who used to work in cell offices feel that their work environment deteriorates because of more distractions and disturbances; the change is greater. However, if the co-worker used to work in an open office landscape, his or her work experience does not deteriorate, perhaps because there is now an opportunity to choose the appropriate type of workplace, instead of sharing the same type of space with everybody.

Changing to an activity-based office did not result in any change of the psychosocial work environment or affect general health, not even sleep patterns or physical disorders.

“There may be effects in in sleep patterns or occurrences of physical disorders that we couldn’t discern after only twelve months, however.”

Researchers noted that when you had tried working in an activity-based office, you become more positive with time and the percentage of staff who are positive increases. However, more than 50 percent still prefer a cell office after the change.

Over a hundred participated in the study

During three years, researcher from the University of Gävle have followed how 500 employees at Trafikverket experienced the first major transformation in office design carried you by Trafikverket in several locations in Sweden. The transformation involved a change from cell offices and open offices to activity-based offices.

In questionnaires, co-workers responded to questions on their health, satisfaction with various aspects of the work environments and how they experienced their work performance etcetera. 110 co-workers also carried out work tasks demanding high concentration in different types of office spaces, and they also wore motion sensors to measure physical activity.

Haapakangas, A., Hallman, D., Mathiassen, S. & Jahncke, H. (2018). Self-rated productivity and employee well-being in activity-based offices : the role of environmental perceptions and workspace use. Building and Environment. [Submitted - not available yet].

In one office, the transformation was successful and co-workers were relatively satisfied, but in two of the offices the change didn’t go according to plan.

“We are continuing with the research project. Problems that occurred are now being managed and my colleagues will follow up this process,” Helena says. “It is important to remember that there are both pros and cons with different office designs and that activity-based offices may differ among themselves, even within one organisation and country.

For this reason, it is vital that we continue to clarify what parameters are more important than others to focus on how to reach high productivity combined with satisfied, healthy members of staff. All units/groups in an office might not need the same office design, and we can’t be sure that everyone needs to alternate between different work spaces,” Helena Jahnke concludes. 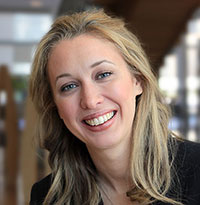