The salamanders who changed city children

“When children from the city were given the responsibility for helping vulnerable salamanders, the children’s values and feelings about nature changed fundamentally,” says Stephan Barthel, environmental researcher at the University of Gävle. 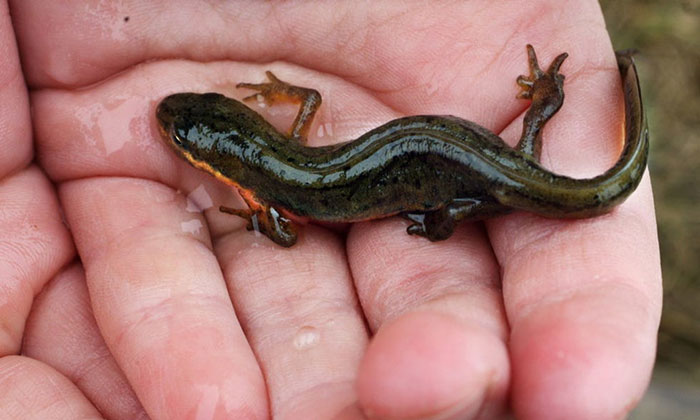 Together with researchers from Stockholm Resilience Centre, Stephan Barthel has for two years followed a project in which pupils from a school in Bromma, Stockholm, acted as conservations during school hours.

“We want to draw attention to the fact that in the ongoing urbanisation process, which aims to provide housing for 2,7 billion people, the trendiest strategy is to increase density. This means that we build away opportunities for children to become connected to nature, if we fail to safeguard natural environment areas,” Stephan Barthel says.

The pool became a death trap

A pond in Olovslund’s park in Bromma contains one of the most important breeding places for Sweden’s two species of salamanders in the Stockholm region. A major problem has been the fact that every year the salamanders have fallen into an adjacent concrete pool on their way to their breeding grounds. As the pool contains no water at that time of year, it becomes a death trap as salamanders cannot get out.

In 2007, local authorities attempted to solve the problems in a number of ways. However, as their measures proved ineffective, they turned to a local school for help.

Since 2008, Olovslund school participates in the salamander project. The project involves 60-70 pupils and the purpose is twofold; to save the salamanders and to teach pupils about conservation.

On every lunch break during the salamanders’ breeding season, which lasts from April to May, the pupils carefully search through piles of leaves in the concrete pool for salamanders, placing all they can find in buckets filled with water. The pupils themselves put the piles of leaves there beforehand to give salamanders somewhere to hide from the sun.

Before releasing the salamanders into the adjacent pond, the pupils document the species and the sex of the salamanders and also note in which pile of leaves they found them.

Their teacher then sends these daily reports to a biologist who supervises the entire project and notes migration trends and the number of salamanders caught.

The project has now been up and running for ten years, and, as a result, Olovslund pupils have rescued 1204 Crested newts and 3715 Common newts.

“Thanks to the efforts of these pupils, the local salamander population can remain stable in a time when urbanisation threatens a number of urban amphibians,” Stephan Barthel says.

Learning with all senses

This project exemplifies a different type of learning from one when pupils read in a book or hear their teacher speak.

“I we only read about something, the change in us is more superficial, but when we learn with all our senses, feeling, smelling and watching, it becomes an experience that can change us much faster and on a more fundamental level.”

Stephan Barthel says that the researchers have observed a major change of values and feeling for nature in the children; many of them afterwards expressed a desire to work with the saving of animals and nature conservation in the future.

“Almost all of the participating children had also observed salamanders out in the wild, which they had never done before. So, they had learned to see wildlife and nature in a new way,” Stephan Barthel concludes.