Robotisation and kit-packs a winning team

“Automation combined with kit-packs enable you to lower your costs and investments would pay off in a realtively short time,” says Chris Dominic, researcher in logistics at the University of Gävle. 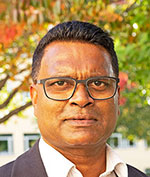 A research group from the University of Gävle are highly committed to the development of companies in the region. Chris Dominic, who focuses on logistics, has explored the possibilities for the engineering company MAFI, located in Mora, to bring home more production.

Today, MAFI does none of the packaging and manufacturing of their brackets for base stations antennas except for some labelling.

“I have looked into the possibilities for the company to do it themselves instead of buying these services. Today, the company only makes the supports for the antennas and they would like to develop from just having a few high-volume products into having several”.

By studying the company’s logistic flow and its actors involved, Chris Dominic has explored whether automation would make it possible for the company to do it themselves.

“When the package reaches the end-user, the assembler in this case, this individual just needs to open the kit-pack to find all that is needed to assemble the antenna.”

To bring back production, Chris says that it is non-traditional production thinking involving automation, robotisation and, perhaps, digitalisation that is needed.

“Automation combined with the idea of a kit-pack makes it possible for them to lower their costs and the investments would pay off in a relatively short time. Moreover, only one new employee was needed, a fork-lift truck driver.”

Chris Dominic carried out the study of MAFI together with an institute in Norway, Interreg. The next step involves several studies to explore the possibility for other companies to go through a similar development. One example is the manufacturing of electric vehicle batteries in the automobile industry.

“We need more studies to determine if this is true also for other companies or only for this one. Many companies, like the big process industries are looking into this trend right now.”

The researchers at the University of Gävle assist companies in making long-term sustainable decisions regarding the localisation of production, decisions in which the whole supply chain is taken into account.

“Innovation demands proximity between different functions in the supply chain, between production, market, product development and logistics, which all need to work together as a whole and this means that production needs to be brought closer to home,” says Professor Per Hilletoft from the University of Gävle