How smart is The Smart City?

“We would like to demonstrate how we can build smart cities in a better way, a way in which we consider nature and environmental concerns to a great extent, because no one is a smart as nature itself,” says Johan Colding, researcher at Urban Studio, University of Gävle. 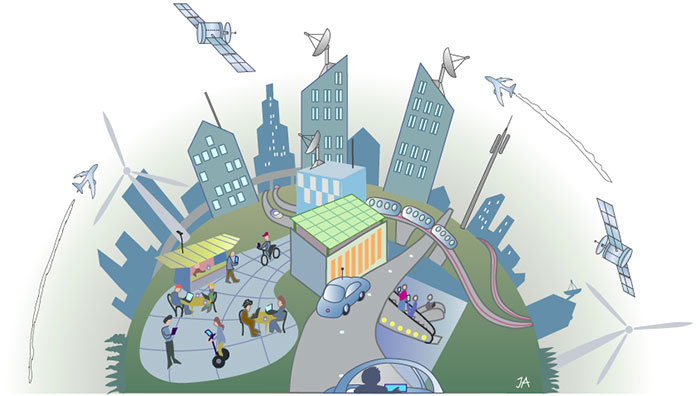 The Smart City by Jonas Adner

Urban Studio, the research program on urban sustainability, aims to dig deep into ideas about the Smart City during two days at the University of Gävle, as leading researchers from Europe and Sweden gather to discuss the rapid development in what has been called “The Smart City.”

No one is as smart as nature itself

Johan Colding describes how we could build smart cities in better way. The city could be viewed as a system in which architecture efficiently interlinks different places, and where workplaces are located closely to residential areas. Moreover, creating attractive environments is at the top of the agenda.

“Nature-based solutions in choice of material, that is green roofs and walls, combined with green environments give pollinating insects opportunities to exist in urban environments and we should create conditions to enable organisms to move along avenues, for instance,” Johan Colding explains. “For no one is as smart as nature itself with its self-organising systems.”

One focus is on how to build in resilience to major catastrophes like, for instance, a power cut that shuts down all IT infrastructure, and we should build so as to protect vulnerable social functions like hospitals from sabotage.

“Parks need to be left intact so they can absorb rain and wind and create all the ecosystem services that natural systems generate. In addition, the ecological memory needs to be protected, because it enables an ecosystem to be rebuilt after major disturbances.”

“In a clear-cut forest area, memory is very low, but if we save some trees and structures, a memory remains which enables the forest to regenerate.”

“This type of knowledge, this memory needs to be stored somewhere. For this reason, it is very important that children growing up in cities made of stone today dig in the soil and run in the woods, like we did when we grew up and learned how to care for the environment, for nature.”

Researchers know that we need to give green environments in cities a lot of space, because nature is important to our physical and mental well-being; these green oases are in fact crucial to our well-being.

“Urban planners received information concerning which places that needed to be redesigned to increase quality in the urban landscape, while people became more involved as they were invited to give their opinions about their city.”

Do you want more information about Urban Studio?