Tsangnyön Heruka, the madman of Tsang, speaks to us from 16th century Tibet through poems that are now for first the time translated from Tibetan. “These songs have a general human interest making them timeless and relevant still today,” says Stefan Larsson, researcher in religious studies at the University of Gävle. 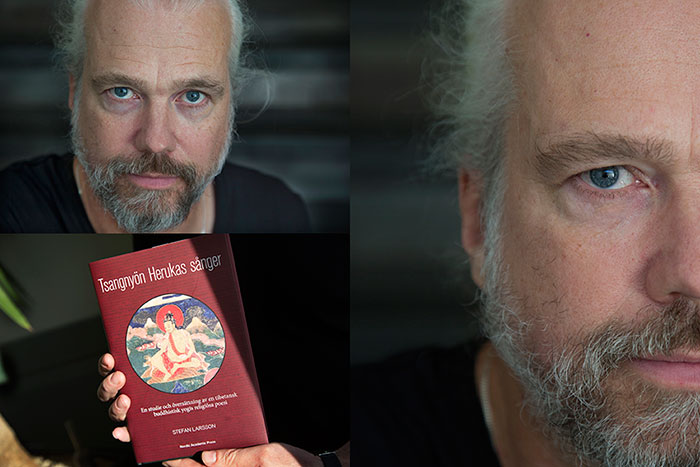 A timeless message of compassion

In his poems, Tsangnyön Heruka repeatedly returns to the message that we should be unselfish and show compassion with and kindness to all sentient creatures.

“An example of his extraordinariness was that he decided that a woman should take over as head of this tradition after him.”

Tsangnyön Heruka devoted a lot of time to meditation in secluded, distant places and he showed no interest in being at monasteries, nor in owning things.

The so called mad yogins, or holy madmen, can be found in other religions as well; these individuals behaved in a manner which was unaccepted from the standpoint of the standards and norms of their societies.

Tsangnyön Heruka was originally a monk, but left his monastery and broke a great many conventions, both religious and social ones. He could be provocative in many different ways.

“In one poem I translated, for instance, he accuses a king directly for stealing from the people, and he states that this act will have consequences for the king,” Stefan Larsson says. “Tsangnyön Heruka was seen as holy, mad person and the kings often had great respect for him; many of them became his disciples and financed the printing of his books.”

Wanted to revive the ways of Buddha

Stefan tells us that in 15th and 16th century Tibet, Buddhism was institutionalised, with large monasteries in which politics and religion had merged. Tsangnyön Heruka was a kind of reformer who strove to revive the lifestyle and teachings Buddha once stood for.

“In 1488, he compiled and printed the book which sparked my interest in Buddhism, one of the most well-known literary texts ever to be created in Tibet, namely the book about the life story of Milarepa. Compassion and humility had been preached by Milarepa in his time, the 11th century, but it was now fading from memory.

Tibet before the Dalai Lamas

The book gives us a unique view of the wandering lives of the yogins and the message they preached. At the same, we are shown what Tibet before the Dalai Lamas came into power in the 17th century was like.

Tsangnyön Heruka (1452–1507) is a major literary figure in Tibet. His collection of songs was printed in 1508 as a tribute to the deceased master, and this collection has made his insights available to those who came after him.

Up till now, they have only been available in Tibetan woodblock printings, and religious historian Stefan Larsson’s Swedish version is the first translation into another language.

Stefan Larsson defended his doctoral thesis on the mad yogin Tsangnyön Heruka, building on Tibetan hagiographies, at Stockholm University in 2009. In 2012, after two years as a post-doc at the University of Berkley, a revised version of his dissertation was published by Brill.

In the autumn of 2017, he completed a three-year long research project called “Outside the walls of the monastery,” financed by the Swedish Research Council. Most of his work on the book Tsangnyön Herukas sånger was conducted within the framework of this project.

At present, Stefan Larsson works as senior lecturer at the University of Gävle.

“One could say that the exploration of Tibetan Buddhism has coloured my whole adult life. There is so much to be found in these ancient texts and the messages are very much relevant to us who live in these conflict-ridden times,” Stefan Larsson concludes.