Stereotyping of older people can make us lose our empathy

“If we portrayed older people more fully, as unique with their individual personalities and experiences, we would become more involved and understanding,” says Karin Lövgren, senior lecturer in media and communication studies at the University of Gävle. 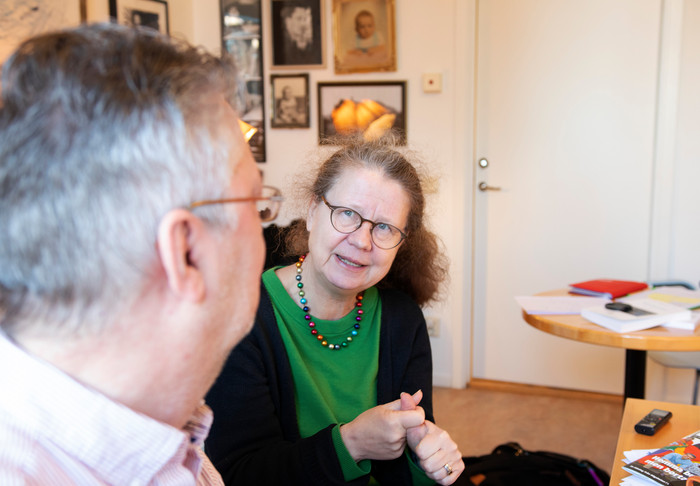 Aging is made frightening

In an ongoing study, she explores representations of menopause in popular culture. Here, women’s femininity and sexuality are tied to the ability to become pregnant. She has also observed that women are depicted as older earlier in life than men are. Often, the menopause serves as an indicator of that aging and women’s aging is depicted as strange and scary.

“Cultural beliefs that tie women’s sexuality and attraction to fertility are reflected in popular culture, although there is no such connection in reality. For many women, not having to worry about un unwanted pregnancy is a relief.

Mad with a use-by date

Another belief is that in menopause women become angry and mad. Karin sees a pattern here. When they are younger, women’s anger are often met with questions like, “Are you having your period right now?” or “Are you having PMS?” and as they grow older, it is the menopause.

“TV series refer to a pattern; anger is taboo for women.”

Karin confirms that there are few TV series with older people as main characters. Instead they are supporting actors. As an older woman or man, you become literally invisible in media.

“Are there gender differences when it comes to aging? Yes, there are. You could say that women are ascribed their cultural value on the basis of their looks, whereas men’s performances and actions determine their social value. As a result, older women are the most invisible age group in media.”

Karin Lövgren states that because more people are becoming categorised as elderly, TV series aimed at an older target group are emerging. The market is interested in the grey capital. At the same time, she points out that the women presented as role models are all very thin and look very young.

“We admire them, not for their age, but despite their age. Expectations on women to discipline their bodies, carry on with their dieting and focus on their appearances continues even later in women’s lives today.”

Today, more books on the menopause are published. Possibly, this is because many journalists and readers are now reaching menopause, Karin suggests. Moreover, we are now breaking taboos around menstruation, and the taboo around menopause is also called into question.

“We present too few and too stereotypical images of older people and that is a contributing factor to us losing our empathy. If we portrayed older people more fully, as the individuals they are, we would become more involved and more understanding for this phase of life, old age.”

“Carrying out research on the representations of older people in media is important, not least today when we expect more people to live longer,” Karin Lövgren concludes.

For more information, please contact:
Karin Lövgren, senior lecturer in media and communication studies at the University of Gävle
Phone: 070-453 65b 81
Email: karin.lovgren@hig.se