Researcher from Gävle: “How the mobile phone became a learning tool”

“Mobile phones turned out to be one of the most important tools when upper secondary pupils used IT to support their learning process,” says Jörgen Holmberg, researcher in educational sciences. 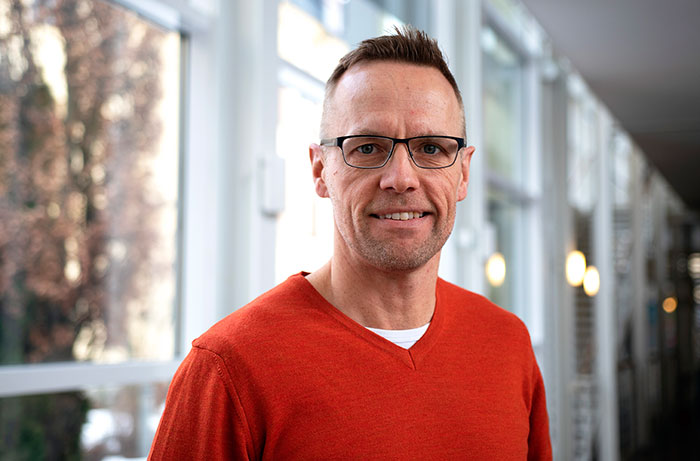 For two years, Jörgen Holmberg collaborated with eight teachers of English in four different upper secondary schools in which all pupils had their own computers. As a researcher, he was visible and present, participating as an adviser and partner in discussions about the practical teaching. With a background as a teacher, Jörgen has a long experience of using IT in his own teaching. Together with the eight teachers, he designed a model focused on how using IT can create a new kind of authenticity in the teaching of English.

“I acted as a sounding board and also supported the teachers in their use of IT. In this way, we added something to the teaching that we could not have done otherwise.”

“I will call him on Skype”

IT gave them the possibility to ask the pupils about what concerned them right there and then, Jörgen explains. When the answer was the environment, everyone agreed that it would be interesting to explore different forms of energy. The pupils contacted experts at SIDA, energy agencies or a relative with a relevant job. “I will call him on Skype so that we can talk with him live and ask our questions.”

“In this way, we can give the pupils quite a lot of freedom and it becomes exciting and fun. The issue we are exploring becomes something that they would like to learn, not just as a school subject but as a life skill. In such a way of working, mobile phones become totally necessary. This is an interesting contrast to the ban on mobile phones which is currently being discussed. Without doubt, mobile phones can be distracting, but if they are used in an adequate way, they can become learning tools.”

In addition, IT was used to create new conditions for shared learning. The pupils documented their work and explained what they were doing by using screen shots from their mobile phones. They also made short films which they edited in small groups to make them feel good about using them.

By using their mobile phones, upper secondary pupils could document their own development but also, for instance, save links while doing searches on the bus. “Here I found something interesting on solar power, I will put this directly into Diigo via my app.”

“They can see how they themselves act and how they present a topic and get feedback on what other people experience.”

Films, texts and sound recordings were all used, and everyone in the group had the opportunity to support one another or give helpful comments from the side to keep the work process moving forward.

“This authentic dimension, to have contact with external actors and to be allowed to use their own personal networks, was something that teachers as well as pupils came to appreciate more and more.”

The fear that the pupils would outshine them

Jörgen says that even if pupils in general are quite good at some types of IT, they sometimes need support when using new tools to a much greater extent than he had imagined. He realised that all teachers need solid knowledge in IT to feel confident and to be able to support some of the students.

“I don’t want anyone to think that teachers do not dare or do not want to. Often, teachers lack the opportunity to actually try. These teachers saw the potential and became interested. Many of them said: ‘I would never have been able to do this without you.’ I could provide that sense of confidence.”

Research with practical and theoretical contributions

Jörgen Holmberg tells us that this kind of research approach is very new, above all in the field of teaching. Design-based research explores the current situation, but also strives to influence those conditions.

“This way of carrying out research enables you to support the teachers there and then. But it also gave me as a researcher a different type of insight; I could find things that I would not have been able to find if I had only asked the teachers questions. At the same time, there are naturally great research challenges involved since you first participate in the design of the teaching and, later on, you study its implementation and its result.

“So, there are tensions and concerns involved, since you are affecting the situation while making observations. However, researchers have worked in a similar manner in other fields for a long time, and in a fast-changing field like IT, I believe that this form of research can be beneficial to teachers, pupils and researchers alike,” Jörgen Holmberg concludes.