She has shown good scientific expertise, a wide range in her subject and she has had a number of publications in scientific journals both nationally and internationally in a short period of time. This is part of the reason that Jennie Jackson, researcher in occupational health sciences, is awarded this year's Royal Skyttean Society Prize at the University of Gävle. 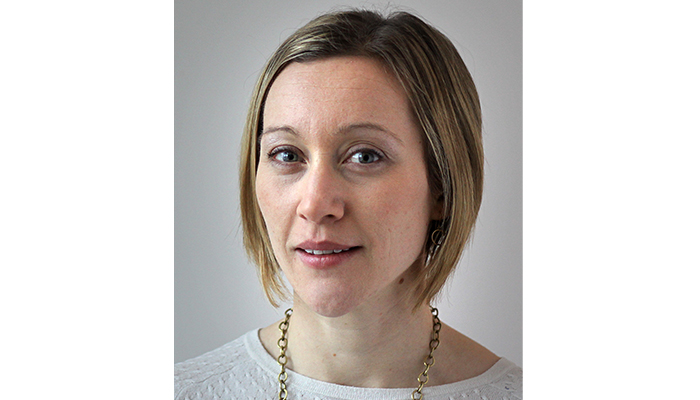 – It's always exciting to receive a prize and even more fun when it's because of my merits. So it feels amazing and it's a strong confirmation of my research and my work, says Jennie Jackson.

Jennie Jackson earned her PhD in 2017 and has since worked as a postdoctoral researcher at the University of Gävle and at Umeå University. In her research, she focuses on measuring physical workload, but also on psychosocial and organisational work environmental factors, and she often conducts field studies in workplaces.

Among other things, she runs a project together with Elis laundry facility in Ockelbo (formerly Berendsen) with the aim of creating a better working environment, safer production and increased social justice.

– We have observed them during the pandemic and how it has affected their working conditions. Now we have just introduced a work rotation with new work methods as they work more as a team and have a larger mix of tasks, for the very purpose of improving health and creating more even conditions, says Jennie Jackson.

She was born and raised in Canada and has a master's degree in biomechanics from there. After her defence of her doctoral thesis in occupational and environmental medicine, she has worked on a number of different projects, which she also does now. Among other things, she is working on a new project focusing on occupational health in e-commerce and employees working at large central warehouses packing groceries.

– I also have a collaboration with Uppsala University now where we are studying violin players. In a lab, women and men are asked to play exactly the same piece so that we can see muscle activity and compare variation and physical differences while they are performing exactly the same task. It's very exciting, says Jennie Jackson.

What drives you as a researcher?

– What drives me is that my work can contribute to people feeling better, being healthier, can continue working and live unimpeded without musculoskeletal disorders and muscle problems. It's a personal desire to be able to help people. I am passionate about health-promoting workplaces and developing knowledge about how we can create workplaces where people feel better.

Jackson, J. (2017). Bias and Precision in Biomechanical Exposure Assessment: Making the Most of our Methods. Diss. (summary), 2017. Uppsala: Acta Universitatis Upsaliensis. 90 p. (Digital Comprehensive Summaries of Uppsala Dissertations from the Faculty of Medicine 1329)

Within the framework of work-related research, Jennie has demonstrated both subject and methodological breadth in the scientific work. Jennie's studies range from controlled laboratory experiments, validation of methods for measuring physical workload and registry studies, to field studies and change management in practice. Jennie's study of change management to promote a better work environment, safer production and increased social justice for the employees at a laundry facility, further demonstrates great applicability in her work. Jennie has also shown great skill in managing projects.

Jennie has a total of 16 peer-reviewed publications in reputable scientific journals, nine of which have been published in the last five years. The publications show good national and international research collaborations with research groups in Sweden, the Netherlands, the US and Canada. Jennie's participation in scientific conferences has resulted in several conference articles and she has also organised symposiums and has on several occasions been assigned as a reviewer for scientific journals. Jennie has also received external funding in competition, which further underlines Jennie's development and independence as a researcher.

All in all, we find that Jennie is very suitable to be awarded the Skyttean Society Prize 2021 to prominent younger researchers at the University of Gävle."