Monday the 9th of May the University of Gävle arranged a ceremony for a portrait display. The portrait depictured Iyabo Theresa Ogionwo, a former student that tragically passed 2019. Her husband Ebi Otsaye Ogionwo created a foundation in her memory that will now donate one million Swedish kronor yearly, to give African students the opportunity to study at the university of Gävle. 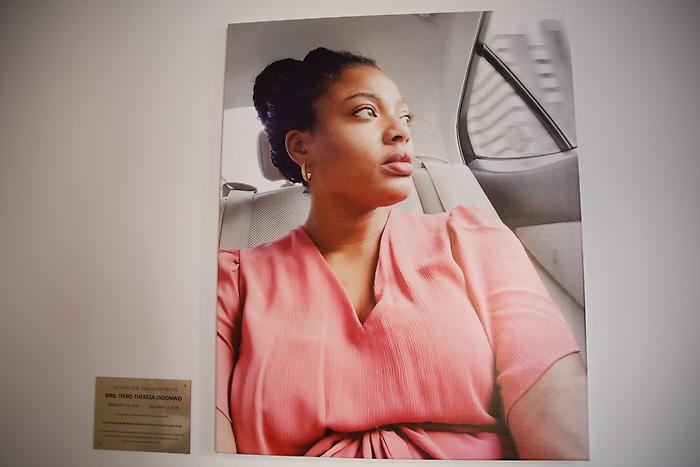 Iyabo Theresa Ogionwo was born in 1978 in Hamburg but grew up in Lagos, Nigeria. She lived in Sweden and Gävle during the first half of the 2010s. During her time here, she was active in cultural and social life. In 2019, she passed away due to a congenital heart defect.

She is survived by her husband, Ebi Otsaye Ogionwo, and four children. Ebi chose to honor his wife by creating a foundation in her name: "Iyabo Theresa Ogionwo Memorial Foundation". The foundation will now donate one million Swedish kronor annually to the University. The money is earmarked for awarding scholarships to African students who are given the opportunity to study the bachelor's program in social work with a focus on international social work. The same program that Theresa studied at the University.

– Theresa had so-called "Street boys" close to her heart, and she wanted to improve the lives of those through education, says her husband Ebi Otsaye Ogionwo.

The money from the foundation will be able to help students fulfill their dreams. The requirements are that they must depict how to use their knowledge to help in their home country

For Universities in Sweden receiving such large donations to make it easier for students from overseas countries is unique. – The offer from the fundation is unique and before we could even accept the money, we had to check all legal terms. We were happy for the students when we got words that it was ok, says Malin Hillman.

Unveiling of the portrait

Theresa's husband and family now live in Portugal, but Ebi Otsaye Ogionwo visited Gävle on Monday to be part of the unveiling of the portrait. On site were also friends and acquaintances from their time in Gävle, they were all there to share good memories.

- Theresa loved animals and people, a mother who studied during the day and took care of the family, says one of the women with whom the family lived when they first came to Sweden.

Damian O Eze worked as a priest in the Catholic Church in Gävle when Theresa lived here, and talked about her as a guardian angel who has done a lot of good in her life, and who, even now, will be able to help people thanks to the foundation. Her husband, Ebi, shared his thoughts of Theresa, the importance of loving your partner and living in the present.

– I have a sentimental and nostalgic view of Sweden and Gävle. One of our most beautiful moments together we had cycling around Gävle, says Ebi Otsaye Ogionwo.

– The photo represents who Theresa was, a thinker who always thought of others first, says Ebi Otsaye Ogionwo.

During her time in Gävle, she worked with RAPATAC, she was involved in starting the "Gävle meets Africa" ​​festival in Gävle, which was also the first festival in northern Sweden focused on the culture that exists in Africa.

2016, When Theresa was in her final year in the International Sociology program at the University of Gävle, she started a non-profit organization, "Selfless", which would help victims of Boko Haram, as well as those who had become orphans due to AIDS.

– We want everyone to come and remember Theresa in September and talk about one of the most important things in her life, international social work, says Ebi Otsaye Ogionwo.

Annika Strömberg, Vice-Chancellor for Internationalization, also attended the meeting, as did Komalsingh Rambaree, senior lecturer in social work, who said a few words about Theresa. 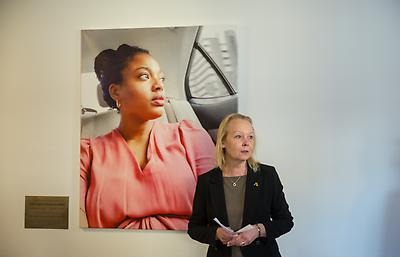 You can read more about Theresa on the foundation's website Iyabo Theresa Ogionwo Memorial Foundation.

You can read a previous article published at the University of Gävle 2016, Theresa wants to help victims of Boko Haram. (In swedish)

Theresa´s painting hangs in the corridor from Valhall to house 51 (Frigg at the University of Gävle).

The foundation wants to keep Theresa's memory alive and therefore an annual seminar day will be organized in September on the theme of international social work. The first seminar will be held on September 23, 2022.