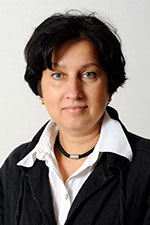 Liya Kalinnikova Magnusson is a senior lecturer of Special Education.

Fundamental challenges in SNE towards inclusion and how this developmental process is contextualised by political choices in educational reforms internationally; comparative studies in education; process of decentralization and deinstitutionalization in Eastern neighbouring countries; teacher education curricular studies; dynamics of change of SNE targets.

2014 – ongoing senior lecturer in special education, Department of Education, Faculty of Education and Business Studies at the University Gävle, Sweden.

2012 – 2015 Centre for Russian and Eurasian Studies at Uppsala University, Sweden.

2004 – 2010 Docent of the chair of social work at Pomor State University named after M.Lomonosov, Russia.

1999 (got a docent degree) – 2003 Docent of psychology of the Chair of Psychology at Pomor State University named after M.Lomonosov, Russia.

2000 – 2009 Rehabilitation centre for children with special needs, in Archangelsk Municipality, Russia (practical work with small children with mental health problems and different disabilities and their families).

1991 –1995 The Research Institute of Defectology/Correctional Pedagogy of the Academy of Pedagogical Sciences, Moscow, Russia.

1995 – Certificate of highest qualification as a special teacher.