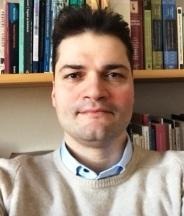 Iulian Cananau is a senior lecturer in American literature.

Iulian is a member of the SAAS (Swedish Association for American Studies) and is primarily active in research on literary history, history of ideas, and American studies. He is interested in the "The American Renaissance", a "classic" period of nineteenth-century American literature, when writers like Ralph Waldo Emerson, Edgar Allan Poe, Herman Melville, Frederick Douglass, Margaret Fuller, Walt Whitman, and Nathaniel Hawthorne were most active and the American national and cultural identity was formed, explained and questioned. Influenced by Reinhart Koselleck's "Begriffsgeschichte", in literary theory, Iulian Cananau has proposed a new approach to understanding and analyzing the relationship between the literary text and its historical and cultural context by examining certain concepts (such as "democracy", "nation", "race", and "representation") and their meanings. The research has resulted in several conference contributions, as well as a book, a book review, and two articles (one forthcoming) in Scopus-indexed international journals.