The overall aim of this project is to provide theoretical and practical solutions to overcome errors due to the integration of different sensors such as GNSS, Inertial Navigation System (INS) and aerial imagery sensor.

Sustainable development and digitalization of society need reliable data. Today, geodata capturing and quality analyses using different satellite and airborne sensors are very important. The application of aerial photogrammetry techniques to generate 3D models of our environment has been used for decades. The overall aim of this project (funded partially by Lundberg’s foundation) is to provide theoretical and practical solutions to overcome errors due to the integration of different sensors such as GNSS, Inertial Navigation System (INS) and aerial imagery sensor. 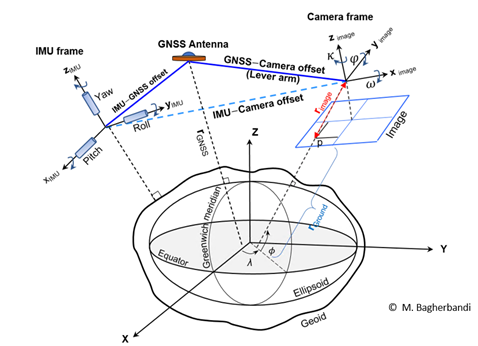 Applications of this project are wide and have been identified, such as urban planning, 3D city modeling, flood management, forestry management, and urban asset management. This project was planned as Ph.D. project, and it can be categorized within geodata quality and 3D digitization. 3D digitalization contributes to economic, ecological and social sustainability.

Research collaboration between the University of Gävle (HiG) and Lantmäteriet (LM)

On April 2016, the first deliberation took place between the University of Gävle (HiG) and the Swedish mapping, cadastral and land registration authority (LM) to determine the areas in which research areas could and should develop. The authorities were represented by the vice president of research at HiG and the General Director of LM. As a result of this initial deliberation, it was decided to work on the strategies and relevant research areas. There is a research of common interests within both authorities in the areas of geodata (including property information) and geodesy. After two initial deliberations (April and May 2016) and a workshop (June 2016), three areas of strategic research have been crystallized:

This project was designed based on research area no. 2.