To content
Search
Faculty of Engineering and Sustainable Development 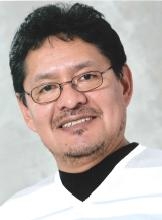 José Chilo has got his B.Sc. degree in industrial engineering from University of San Agustin Arequipa , Perú in 1986, and B.Sc. degree in electrical engineering from Royal Institute of Technology (KTH), Kista ,Sweden in 2001. From 1986 until he began his studies at the Royal Institute of Technology in 1998, he worked as a consultant in various industries such as textiles, garments manufacturing, transportation, etc., both in Perú and Sweden. He has got his Ph D in physics from the Royal Institute of Technology in 2008 where he conducted research on signal and data processing, in particular advanced measuring techniques and event classification. He is presently involved in the research project called 'Reliable Machine-to Machine Communications in Electromagnetic Disturbed Environments' at the Center for RF Measurement Technology - University of Gävle in Sweden.